MOTS (More Of The Same) for our group on Wednesday.  A broad area of marginally favorable ingredients for severe storms were forecast from Cheyenne to Broadus.  We favored the northern target, with slightly better deep layer shear for organized convection.  Mid-level height rises were found over most of the area until very late in the afternoon.  After hanging most of the afternoon in Gillette, we ventured north to intercept a supercell moving southeast of east central MT.  On the way, we took in the vistas with a developing LP type supercell to our immediate east.  This towering Cu made for a nice backdrop of the Wyoming countryside!  Continuing north, we latched onto our original target cell near Broadus, MT.  It was mostly a disorganized HP type of supercell, but provided some neat shots before congealing into a forward propagating MCS heading for the Black Hills.  On our way back to Gillette, we encountered gusty winds found 2" hailstones covering the ground north of Weston.  In all, another successful day on the High Plains!

MISC: Overnighted in Gillette, WY. Do not get a taco bag from Taco Johns. Do, however, get the Potato Ole's! 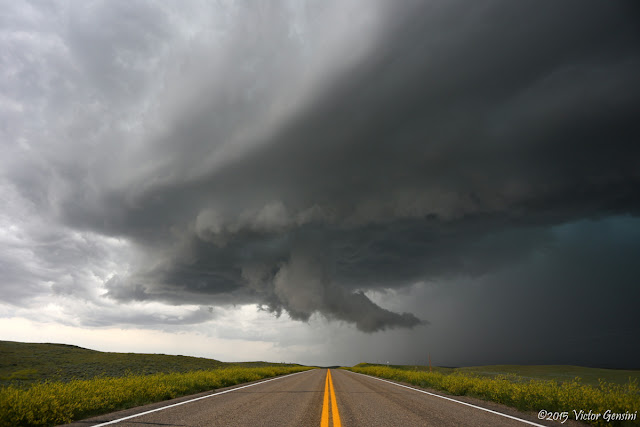