The Cheyenne Ridge provided initiation for convection on 6/23 in an environment with favorable directional shear and modest instability.  The result was robust development of a lone supercell that initially had a very classic supercelll RADAR appearance. Unfortunately, the updraft was not able to balance the cold pool and the storm became outflow dominant (a great example of this process is shown in the timelapse below).  We enjoyed beautiful high plains scenery with eastward advancing thunderstorms including a neat shot in front of a trio of grain bins (one of my favorite shots of the year).  Great views, great people! 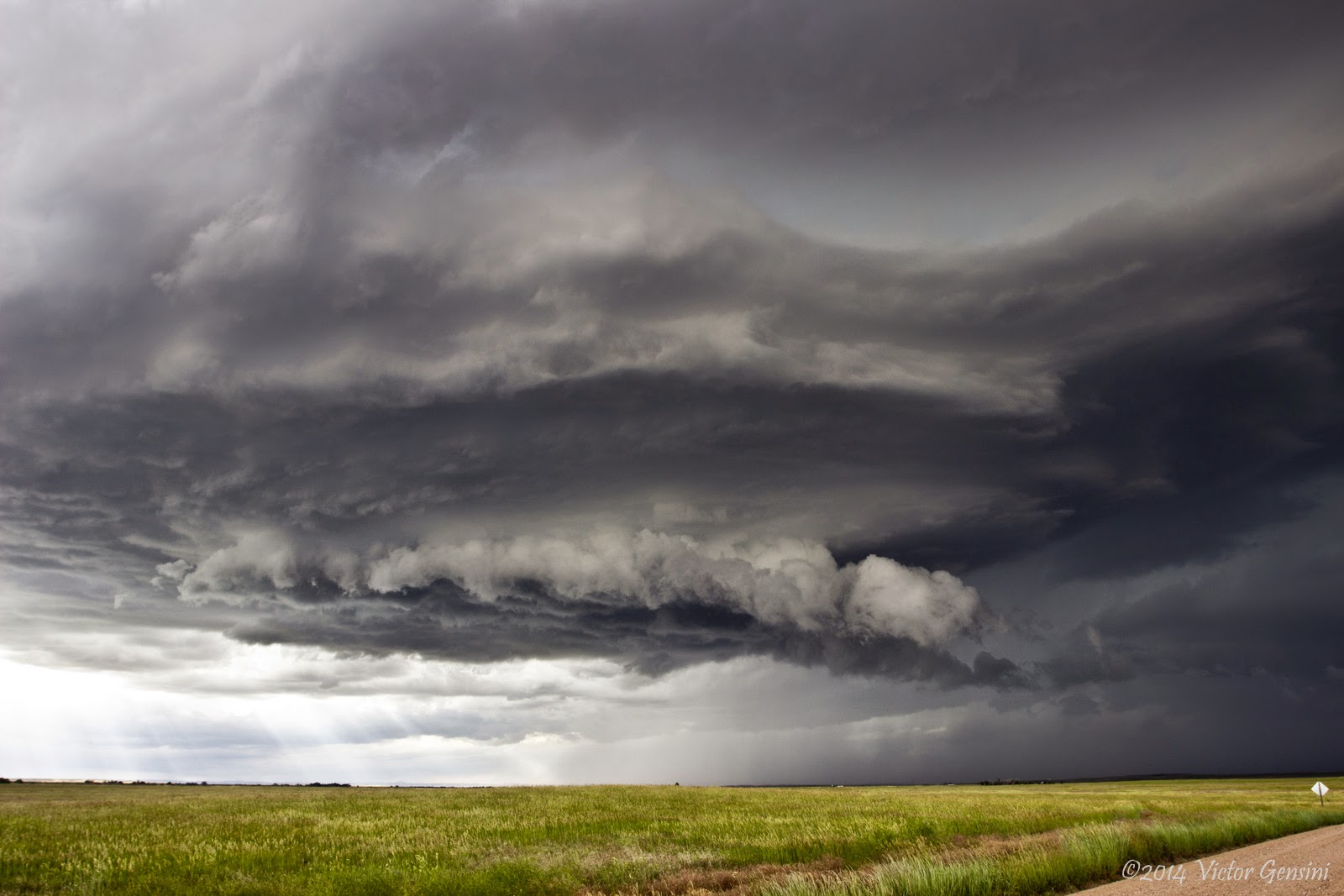 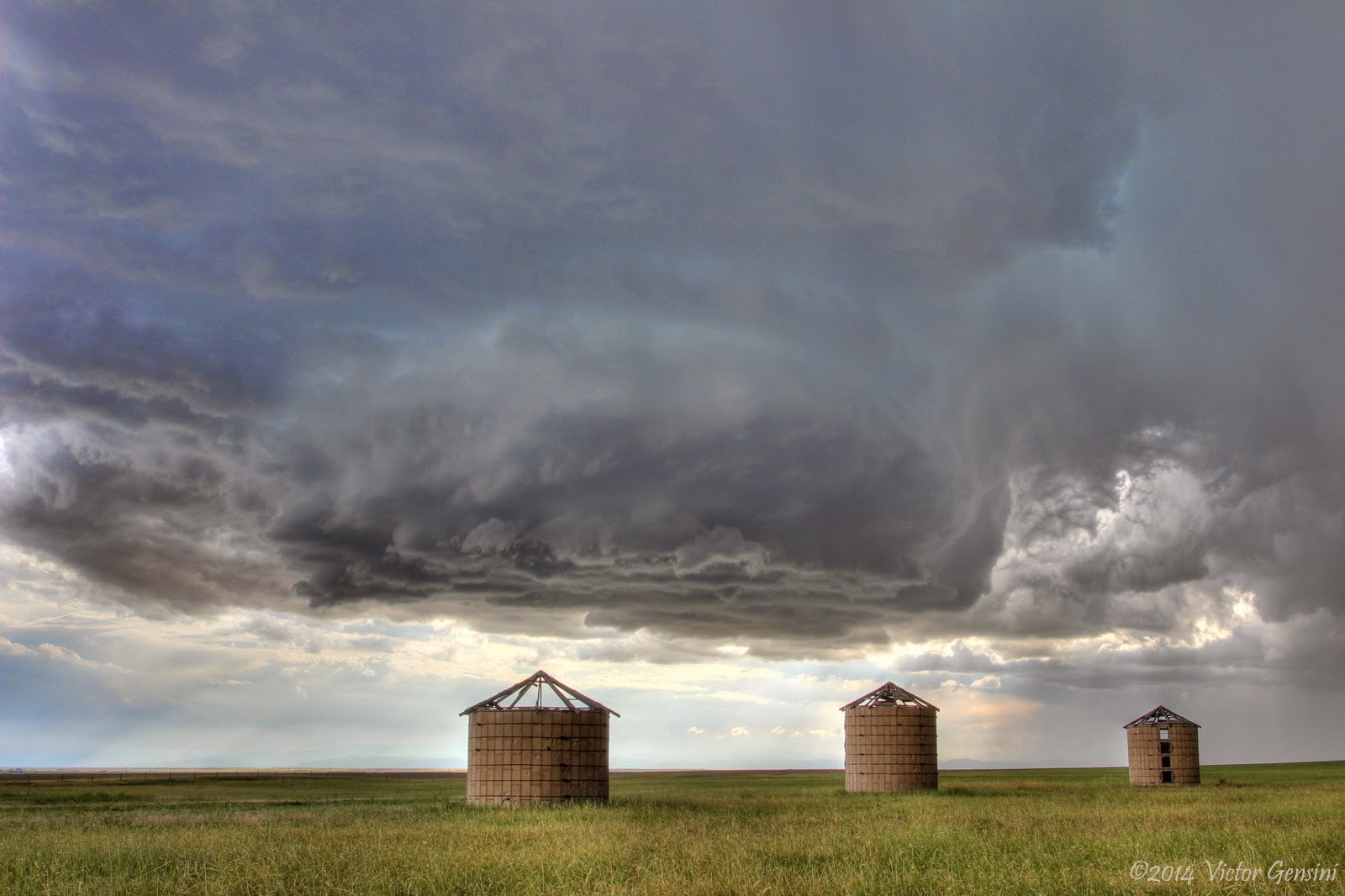 Posted by Dr. Victor Gensini at 2:04 PM No comments:

6-21 featured a risk for severe weather along a weak convergence boundary in north central SD.  This was the first 'chase' day for CoD Thunderstorm Lab Trip 5, and some of the newbies got spoiled with a great day to observe the atmosphere.  We watched a developing supercell near Mound City, SD, and stuck with this maturing convection the rest of the afternoon/evening.  After cold pools from surrounding convection began to merge, we let the significant severe storm pass the road in front of us and shot north to find large hail.  We were able to measure a 2.6 inch stone near Roscoe, SD at 21:03 UTC.  Enjoy the photos and timelapse below! 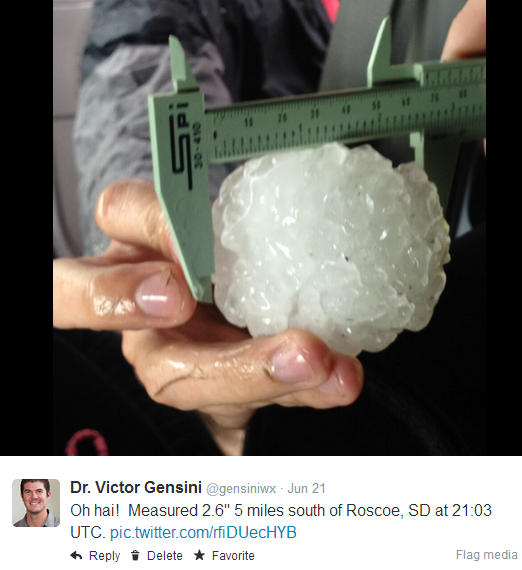 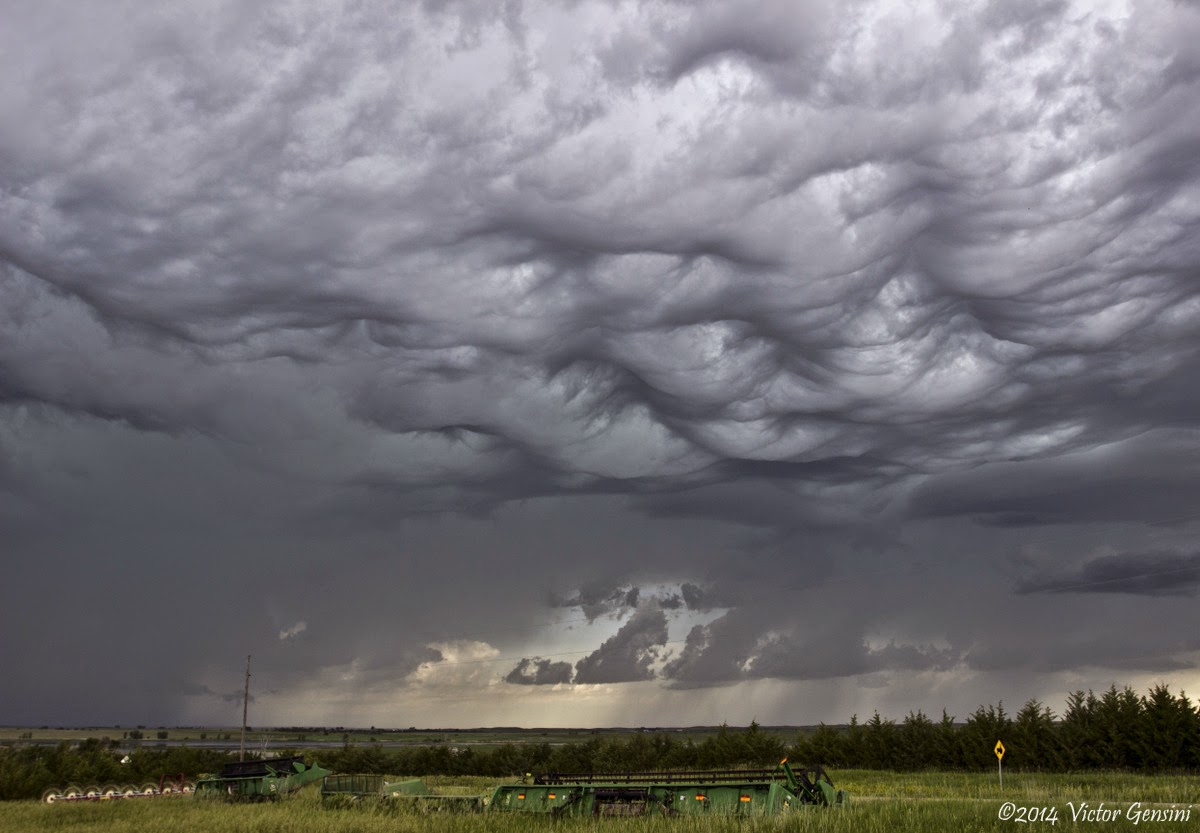 A fairly inactive 2014 for tornadoes was thrown for a spin on 6-16.  Piechota and I left northern Illinois by 6:30 AM with a broad target of northeast NE / northwest IA.  As we rounded Omaha, NE,  a Particularly Dangerous Situation (PDS) tornado watch was issued for northeast NE and extreme western IA by the Storm Prediction Center for areas along/near a retreating morning outflow boundary:


The morning potential for surfaced based supercells was a little unclear, with a fairly large spatial area destabilizing underneath more than adequate deep-layer shear for supercells.  However, by mid afternoon it was clear we wanted to be near Norfolk, NE as cumulus began to bubble along the retreating outflow boundary.  LCLs were manageable in this region for tornadic activity, all we needed was a storm.  The special afternoon weather balloon launch out of Omaha reiterated the enhanced threat of tornadoes given the extreme instability present and the large looping low-level hodographs.  You don't see an observed sounding with a Supercell Composite value over 60 and an effective-layer Significant Tornado Parameter over 10 very often...


The aforementioned towering Cu continued to strengthen, but with a rather benign RADAR appearance.  The initial cell was certainly elevated, both by RADAR and visual appearance, but QUICKLY became surfaced based as it began to ingest vorticity rich air near the overnight OFB.  After a few lightning strikes, it was clear this storm was off to the races (you can actually hear us mention this at the very beginning of the video below).


We drifted with the cell southwest of Stanton, NE where a nice clear slot began to develop.  The cell had that 'look' and it was apparent that tornadogenesis was underway.  In perhaps one of my funnier moments, I ran into fellow chaser Dave Ewoldt (I had never met him before outside of social media) and said very calmly, "I think we picked the right storm." Indeed we did.

As the Stanton tornado began to occlude, we jogged east on Golf Course Rd. as a wedge tornado occluded north of Stanton (see our video below) to reposition for a new developing mesocyclone southwest of Pilger, NE.  We stopped a mile west of NE HWY 15 watching a new developing tornado as the rear-flank downdraft began to surge just to our immediate north (you can see the wrapping rain curtains during this time in the video).  After the surge, the tornado became steady-state headed on a direct course for the town of Pilger.

As the tornado headed into Pilger, a second mesocyclone developed and another large tornado formed just east of the Pilger tornado.

We cut north to Wisner, NE and took HWY 51 east before heading back to the north to see a new developing tornado just west of Pender.  This tornado got large rather quickly and also had a smaller satellite tornado that revolved around the main tornado cyclone.
In all, we witnessed 5 tornadoes that occurred in northeast Nebraska from a safe distance, including the unfortunate killer tornado that hit Pilger.  An exciting, but sobering chase day.

Posted by Dr. Victor Gensini at 5:16 PM No comments:

After a disappointing day of sub-par convection, a northward moving rotating storm emerged near Sutton, NE on the evening of the 14th.  The storm was a bit of a surprise, as it produced a brief tornado northwest of Sutton that we were not able to photograph very well due to our movement and amount of light.  The storm put on a nice lightning display before shrouding in rainfall and moving north of I-80.  Called it quits in Lincoln at the Cornhusker hotel. 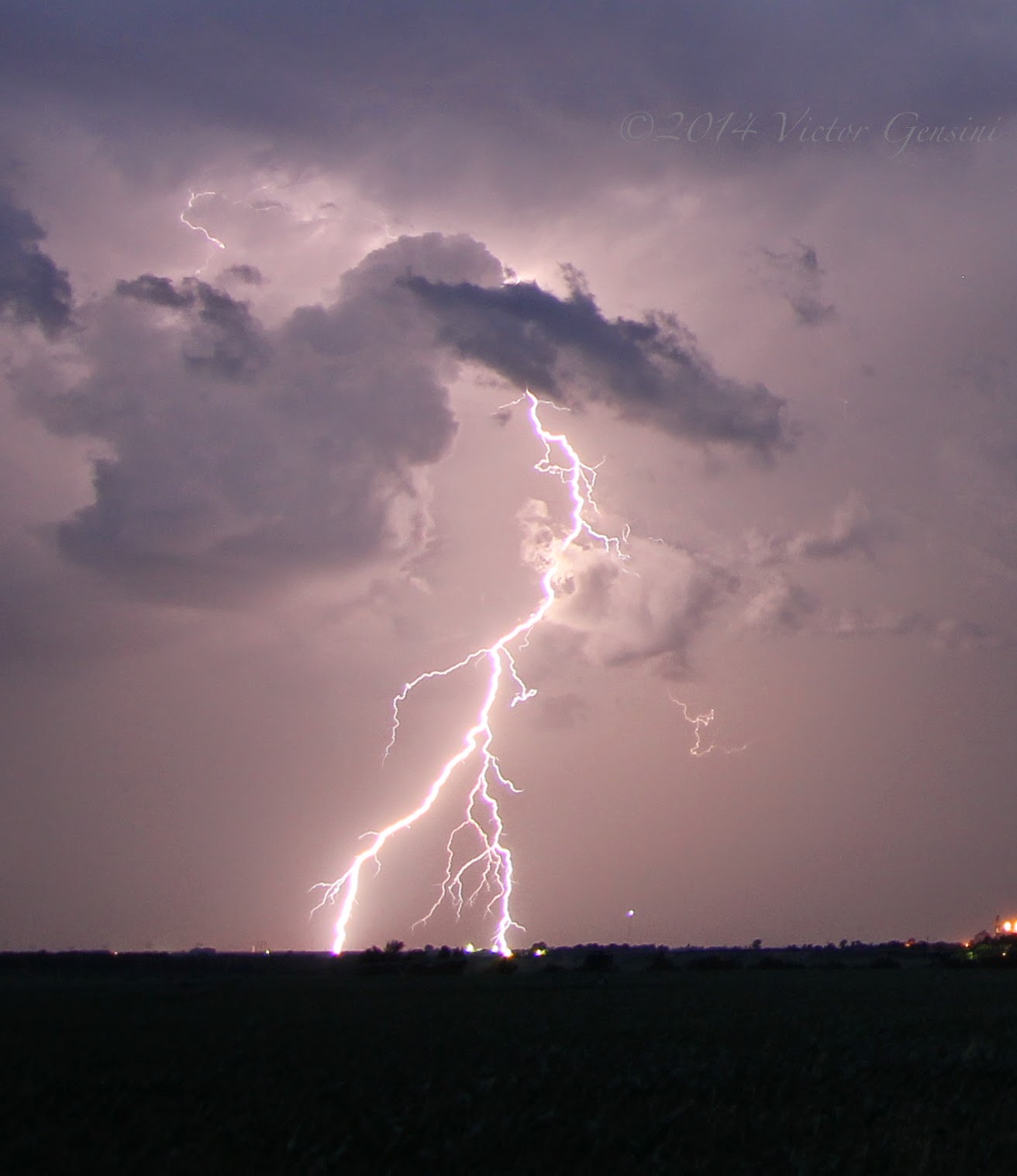 6-13-14 featured a strengthening surface low-pressure with marginal dewpoints on the northern high plains.  We (Laura, Walker and I) sat near Devils Tower (Wyoming) watching a strengthening supercell that would eventually become tornadic.  We stopped along WY HWY 24 to watch the surging rear flank downdraft cut a tornadic circulation just to our northwest.  After the supercell began to merge into a multicell cluster, we pushed east to RAP where we met up with Walker's brother and nephews to watch mature convection push into the Great Plains. 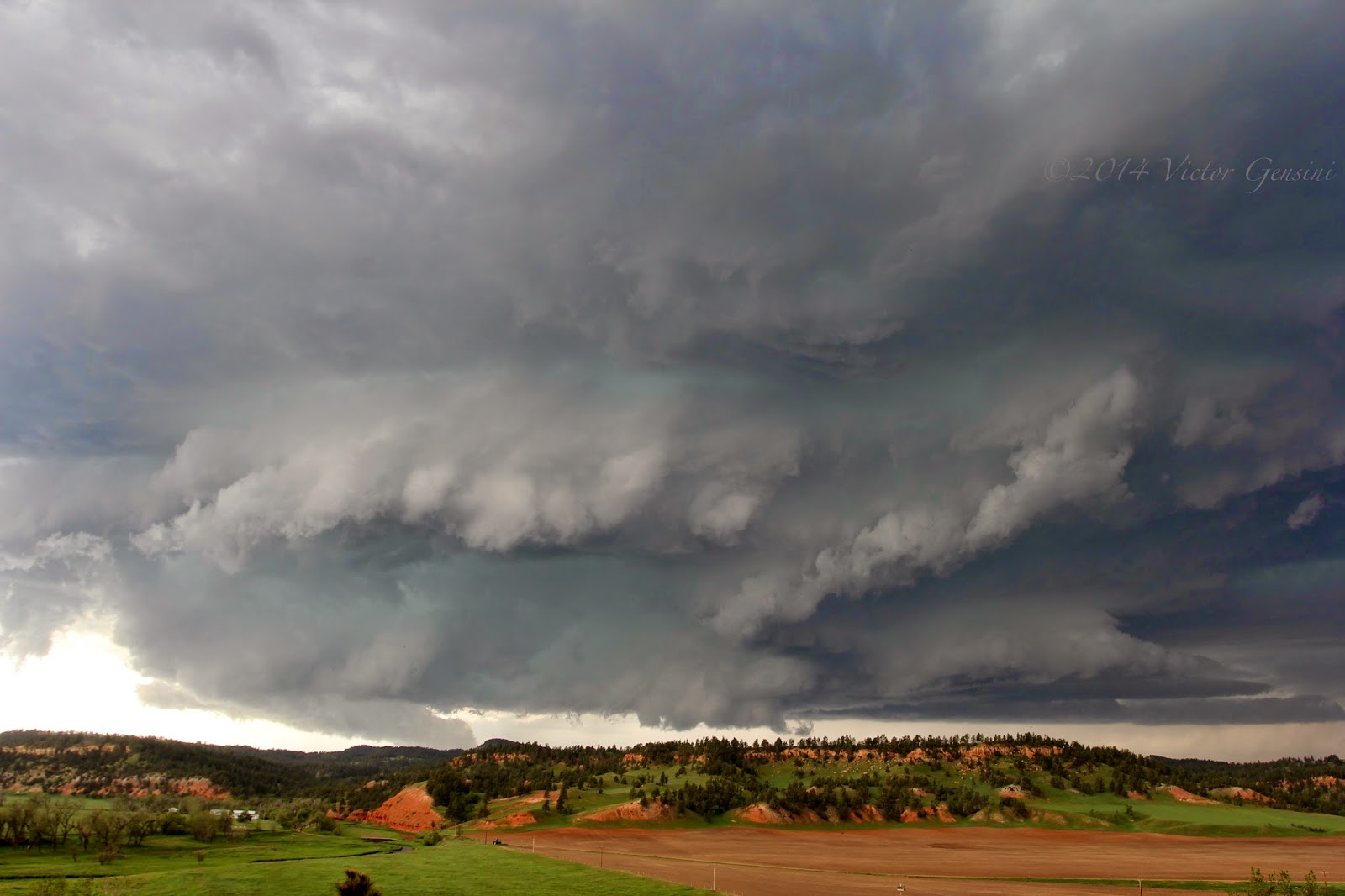 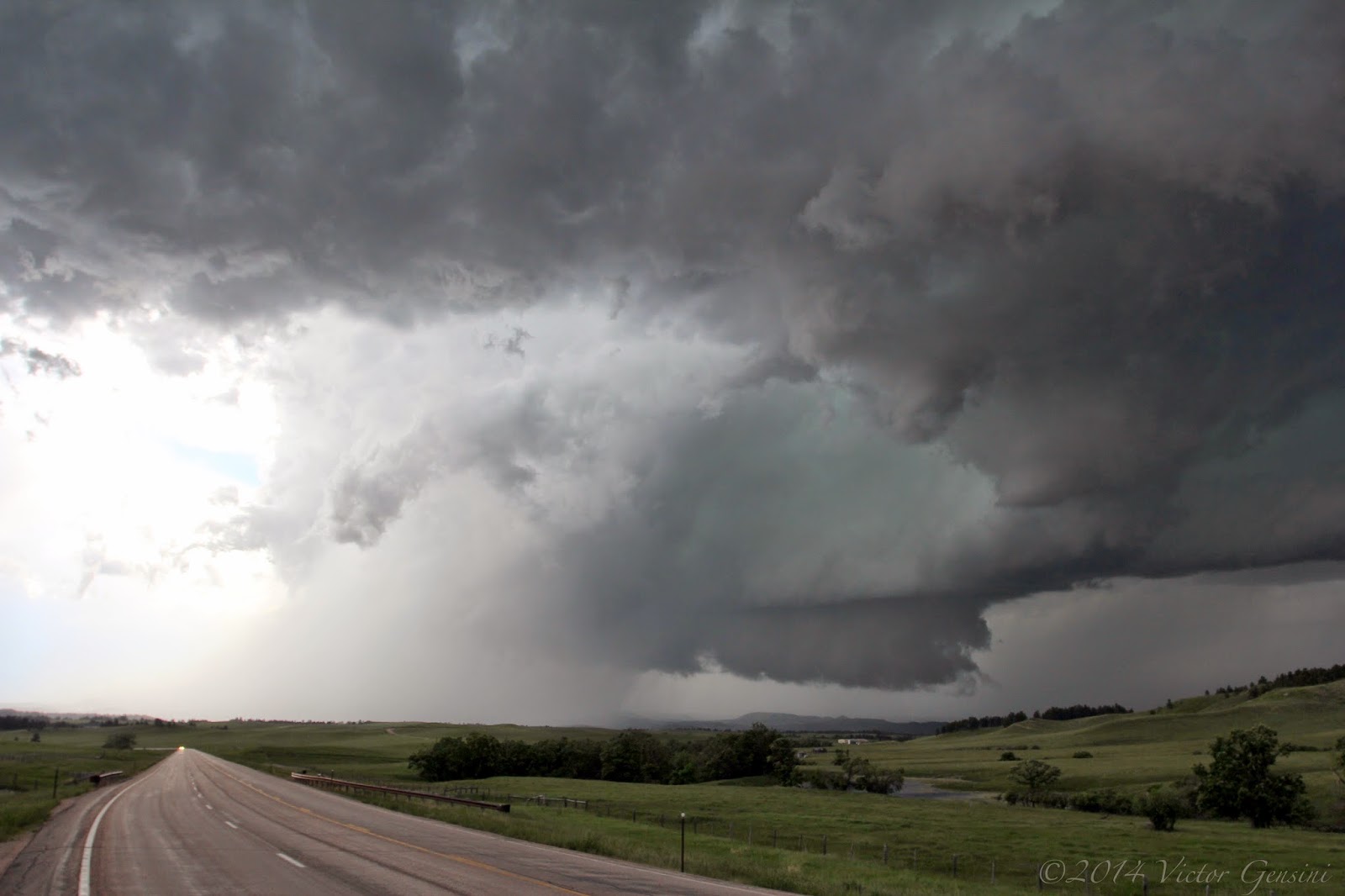 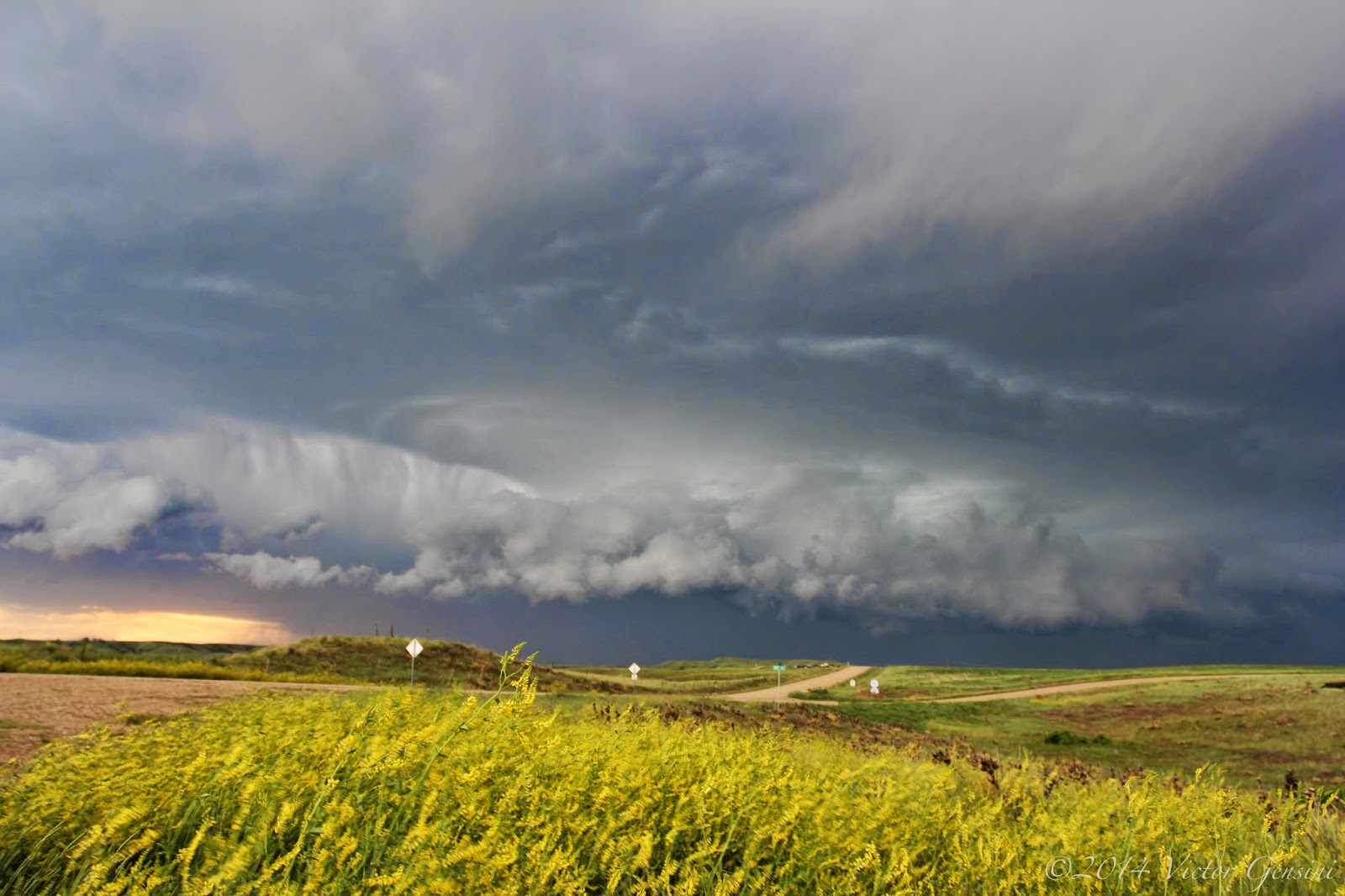 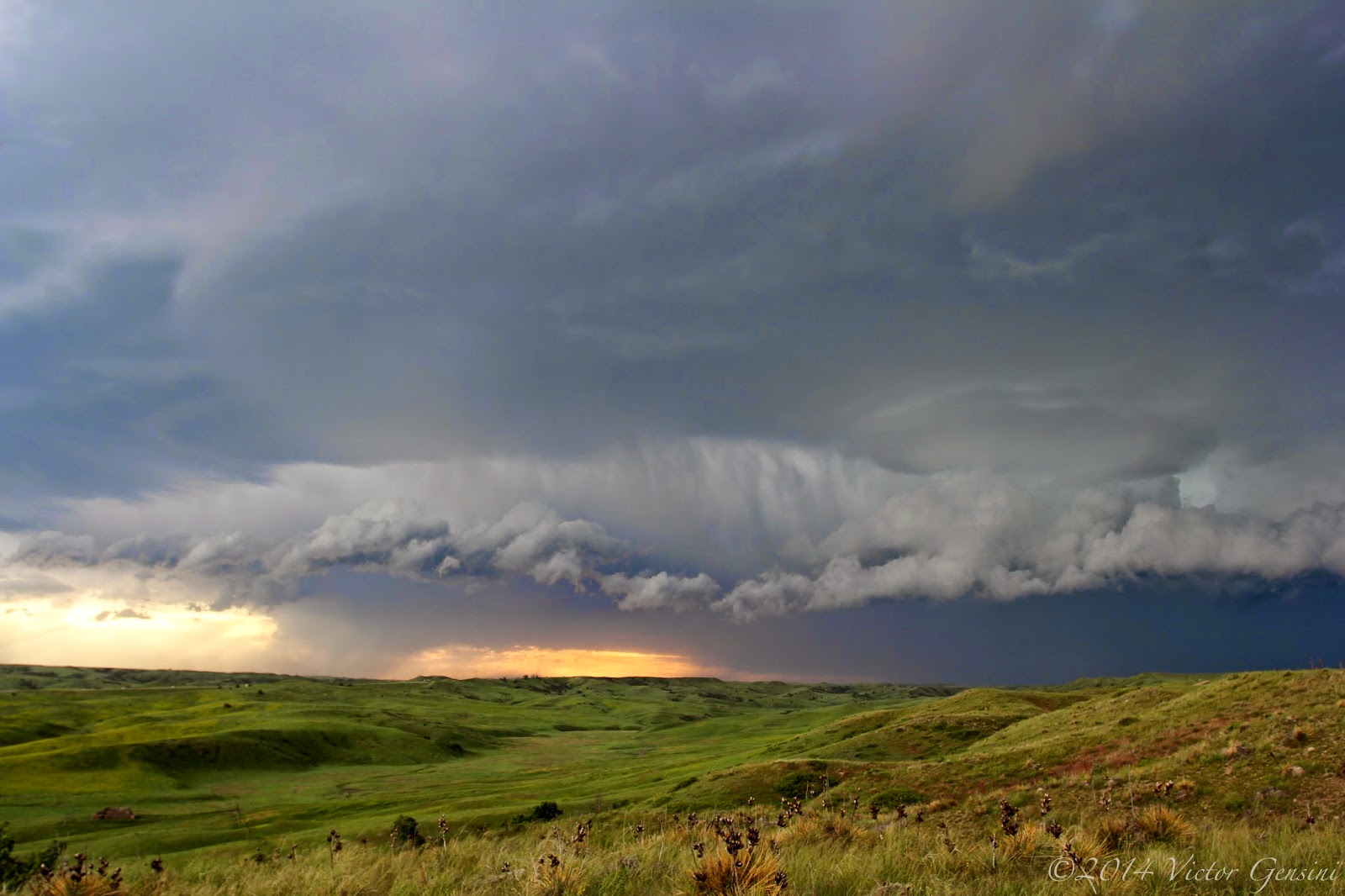