Wednesday was certainly one of my top 5 storm chase days.  We awoke early in Bismarck, ND and set our sites on Yorkton, SK as an initial target.  We analyzed as much as we could from the US side of the border, as we were limited by our data availability in Canada.  After checking into our hotel and grabbing some lunch in Yorkton, we began to notice agitated cumulus begging to develop roughly 100 miles to our northwest (thanks to the folks at Boston Pizza for letting us use their wireless network!).  We took off for the Mud/Quill Lake area and ended up pitting for ice cream in Foam Lake, SK.  Our agitated cumulus were now beginning to tower quite nicely, and we latched on to a severe storm just N of Quill Lake.  This supercell was gorgeous, displaying mid-level striations and a blocky wall cloud in the presence of beautiful yellow canola fields.

This storm tried to tornado a couple times, but tornadogenesis failed due to a new storm to the south beginning to taint the inflow of our initial storm.  We noticed this visually, and dropped south to intercept the new dominant supercell.  This storm was also visually appealing, but not imminently tornadic.

However, the supercell appeared to interact with a warm-frontal boundary and rapidly began to tighten its low-level circulation.  An RFD surge was also noted, but again, circulation just could not get tight enough at the surface for a tornado.  The next cycle of this storm is where things really began to get interesting.  It was a classic supercell structure and cycle, one for a textbook.  We positioned ourselves 1/2 to 1/4 mile south of the where we thought the mesocyclone would cross the road.  The supercell went tornadic quickly, dropping a large cone tornado a mile or two to our WNW and tracked it across the road in front of us at a maximum distance of 1/4 mile.


Wrapping rain curtains from the RFD made it nearly impossible to stay in our current location (without getting damage or putting ourselves in jeopardy), so we jogged east and north to reposition for another cycle.  The storm was indeed cyclic, producing another tornado just to our northwest.

We again jogged east and north to find the storm beginning a new (and visually stronger) mesocyclone.  This cycle produced a pretty elephant trunk tornado in front of a canola field (the shot I've been waiting for!).

Additionally, there was this little bird fart landspout type tornado that occurred during the madness of cycles. I think it was roughly around the time of this tornado, so I will throw it in here.

After making our way east again, it was apparent that the storms were becoming more high-precipitation in nature.  We continued east to stay ahead of a now surging supercell, and were treated with some amazing convective structure.

We had about a 40 min. drive back to our already checked into hotel (storm chasers can appreciate how nice of a feeling this is).  Boston Pizza was again our hangout for the evening, where we enjoyed dinner and a couple cold Canadian beers.  A day for the vault!
Keep an eye on my Facebook / Youtube page for video and timelapse movies in the upcoming days (most likely after I return home).
Posted by Victor at 8:45 AM 2 comments:

We were treated with a neat display of the Northern Lights while driving back to Grand Forks, ND after chasing on Sunday.  This is only the second time that I have witnessed an Aurora, and the first time that I was actually able to photograph.  Enjoy! 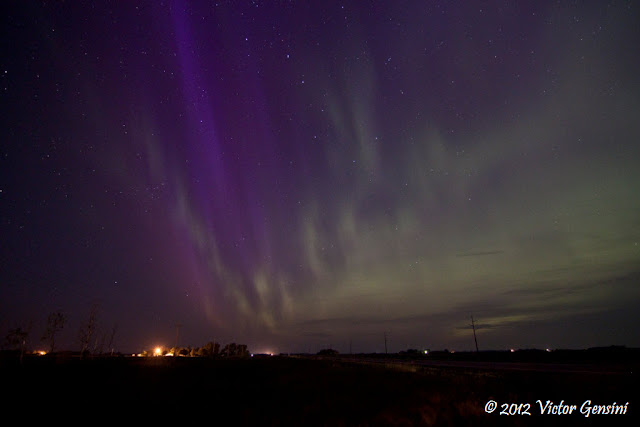 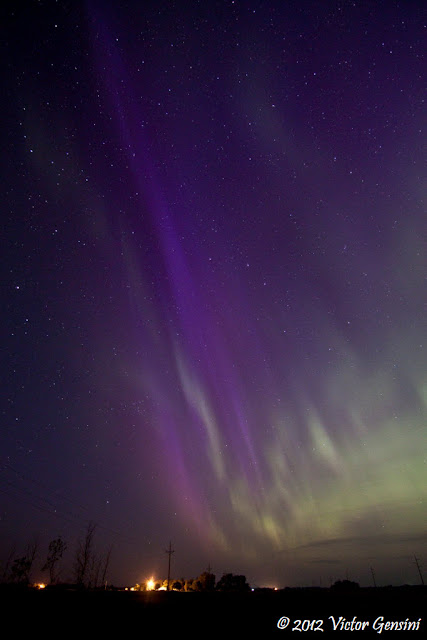 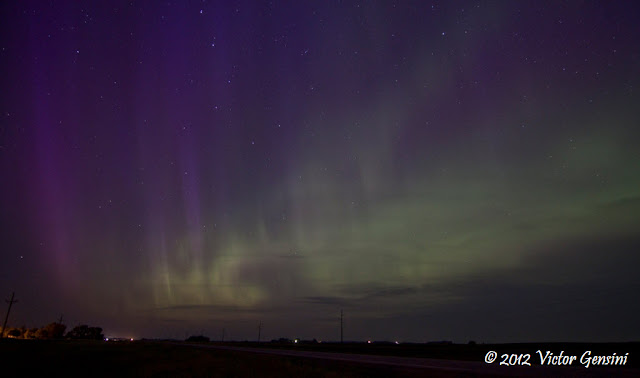 Sunday was the first day in “chase mode” with College of Dupage’s fifth trip of the year.  While we did not witness any tornadoes (despite our storm being tornado warned several times), we were treated with a large and laminar-based HP supercell near Columbus, ND.  Despite favorable ingredients, the storm was very outflow dominant, and never really had that tornadic look to it.  I’m not exactly sure what the failure mechanism was today.  250 hPa ridging?  Too much warm air aloft?  The afternoon environment seemed rather favorable for rotating supercells (hence SPC tornado watch issuance, and subsequent upgrade to 5% tornado probabilities in the late afternoon outlook).  Either way, we had an enjoyable day and look forward to the convective potential later in the week in Canada.
Posted by Victor at 10:31 PM No comments: