After staying in Omaha, NE on Wednesday, Thursday exhibited a slight risk of severe storms across our target area of sw NE. While driving to the McCook, NE area, a nice towering cumulus field was beginning to develop on the nose of a rather impressive theta-e axis. We played some frisbee in Barnett Park while watching cumulus batter each other, trying to figure out which "pulse" was going to become the big show. A rather persistent area of moderately strong battering was occurring just to our east near Cambridge, NE, so we headed that way to check things out. The first initial updraft/downdraft was maturing visually and through its radar appearance. I had really hoped that this storm would set the stage for the rest of the day, but that turned out not to be the case. The storm presented a nice updraft base and vault region, with a rugged scud-sucking wall cloud. We were on our own road with nobody in site...definitely a highlight of the day! What occurred for the next several hours was rather frustrating. The storm became very "pulsy" in nature and could not decide on a dominant updraft. We stuck with this Little Cell That Couldn't until it became very laminar and shelfy in nature near the Elm Creek, NE area, then broke it off and headed back northwest to our overnight location in North Platte, NE, where we ran into CoD trip 3 at the local Applebees. Today looks rather interesting, albeit a pretty lengthy drive. We will be departing for central Dakota shortly... 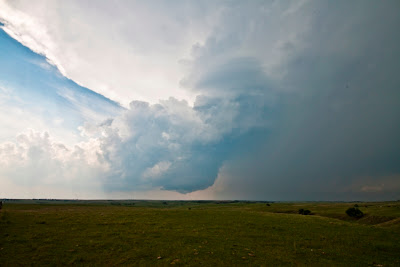 Panny view of the laminar appearance
Posted by Victor at 7:34 AM