We (CoD Trip 5) rang in July with a nice day of storms in southeast CO. High dewpoints and a strengthening wind field excited us for tornado potential. Instead, convective morphology and lack of strong surface heading due to cloud cover really hampered the tornado potential.  We targeted the Trinidad area initially for an early/quick tornado, but the winds/instability did not really materialize as hoped. We opted to move further east, where the lone meaty supercell of the day formed just northeast of Kim, CO.  We watched it for a while (see timelapse) before it grew upscale into a large MSC and associated shelf cloud across southeast CO. 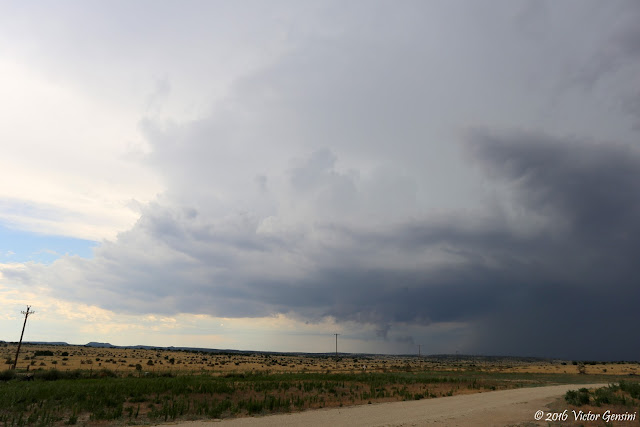 We awoke in Scottsbluff, NE (new Fairfield Inn) with a target near Torrington, WY. Low 60s dewpoints were progged in the NE panhandle, and shear profiles quite supportive of supercell storms. We had lunch in Torrington at Deacon's before heading to a softball park to launch a radiosonde (data attached below). It was clear in our sounding that the moisture was shallow and dewpoints began to mix out to the mid/low 50s by late afternoon. We bailed on the upslope play to head toward Chadron to catch developing convection coming out of the southern Black Hills.  This convection quickly grew upscale into a southward propagating MCS and will likely be classified as a derecho. We got a front row seat for the shelf as it passed through Chadron, where it produced a measured wind gust of 103 mph! Continuing its south track, we slid toward Alliance and caught a nice picture of the shelf as it passed over Carhenge. It was a great spot for a group shot!  For the grand finale, we set up on the southwest side of near Lake McConaughy (near the damn; good idea Walker!) to let the shelf pass and overtake us. There were several boaters that were caught as this derecho passed over the lake. A great day in some beautiful country.