May Verification and June Forecast 2015

First, let's recap the May forecast:

This May will finish with something close to 401 preliminary tornado reports (I will update this when the final May numbers come in).  The 30-year normal (1985-2014) for May is 252 tornado reports, for a final May 2015 tally of 159% of normal.  This falls into the "Above Average" ERTAF category.

Despite a record slow start to the year, April and May have combined to get us back to just shy of 100 tornadoes from the latest ten year average:
I would say this forecast worked out reasonably well, as it called for 90% chance that May would end up average or above average in terms of reported tornado activity.

Onto the June forecast!

Based on the current large scale pattern, dynamical models, analog approaches, and ongoing research, here is my forecast for June 2015:

Here is a map of reported tornadoes for the month of June: 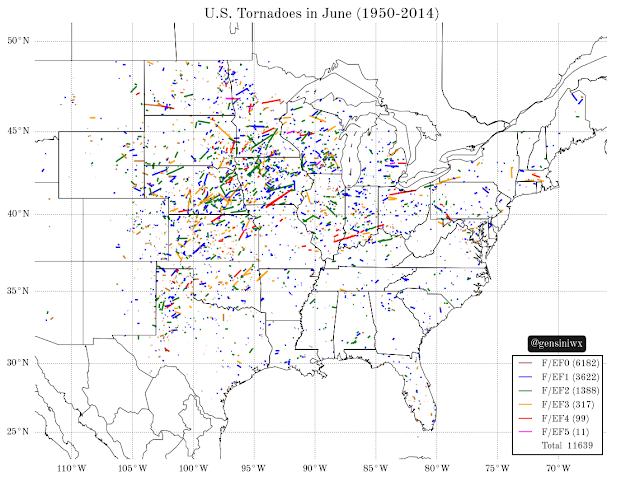 Caveat emptor: These forecasts are solely my own and do not represent an official forecast from any corporation or government agency. Please use caution when interpreting the results and respect their origin.
Posted by Dr. Victor Gensini at 8:42 PM No comments:

Been quiet over here lately.  The weather pattern has not exactly cooperated with our trip the past few days, but Friday yielded a photogenic storm northeast of Pueblo, CO. We started the morning in Amarillo, TX, to an overcast and murky sky, but quickly broke into sunshine near Campo, CO. We pitted in Eads, CO for lunch (yummy restaurant there!) and traveled northeast toward Limon, CO where persistent convection was starting to look more interesting.  We caught up with the cell near Hugo, CO, before it crossed north of the warm front into cooler air, causing the storm to weaken. Our sites then turned to the Pueblo area, where new development near the mountains was progged to head into a more unstable environment.  We watched this beauty of a storm for almost two hours before packing up and heading to Burlington, CO for the evening.  Below are some pictures of yesterday.

MISC:  Overnighted at the swankey Burlington, CO, Best Western Plus. Also, I have never been so COLD on a storm chase! 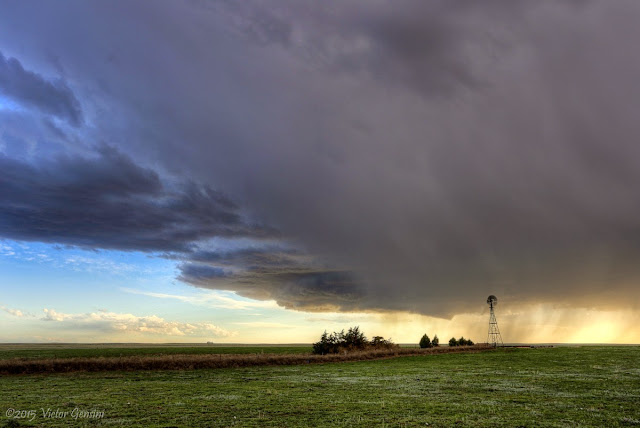 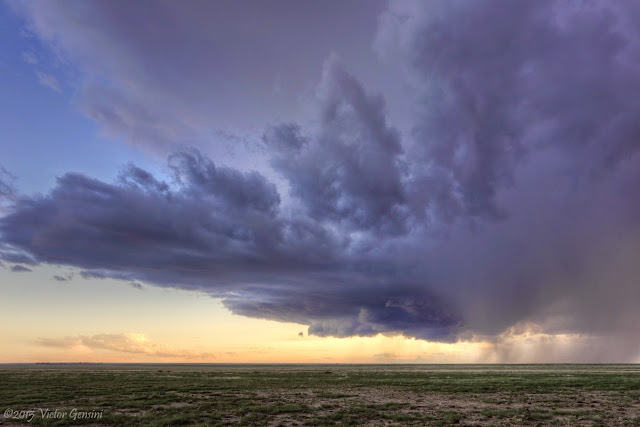 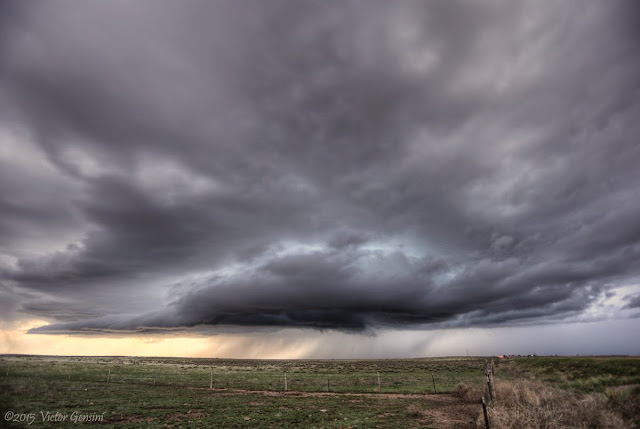 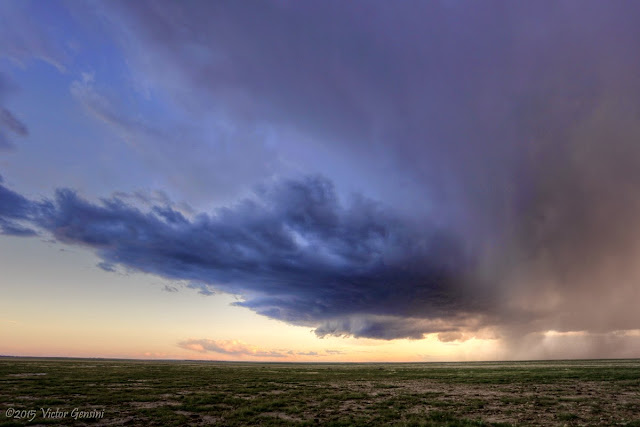 Monday featured a well-mixed boundary layer with dewpoint depressions in the 30F range.  While we did not think the environment was favorable for significant tornadoes, we were still very interested in tracking isolated supercell development rolling off of the Davis Mountains in southwest Texas. After getting on the road, we stopped for a quick lunch in Midland, TX, before travelling to Fort Stockton, TX as an initial target.  Our plan was to get to Fort Stockton and launch a weather balloon from the western edge of the better boundary layer moisture.  We met up with the U.S. Naval Academy field group (led by Drs. Brad Barrett and Gina Henderson) in Fort Stockton in anticipation of the launch.  It was nice to mingle with their group and send up our first successful weather balloon launch from the field!

As we launched the balloon (video below) convection was beginning to form near the Davis Mountains as expected. Our sounding confirmed the suspicion that LCLs were too high for a significant tornado threat. After the balloon made it into the stratosphere, we packed up and headed toward Pecos, TX, where the storm was now maturing into a beastly supercell with very large hail.  We sat southeast of Pecos for several hours watching this nearly stationary storm.  It had some nasty inflow (we measured several gusts over 35 mph) but always seemed to have a strong surface cold pool within a few miles or so from the storm.  In fact, it really never had an established updraft area location.  Nevertheless, it was a very pretty storm and made for easy chasing given the slow storm motions.

After it was clear the storm was not going to get any "better", we fled north behind the core to get back to the interstate (in hindsight, I should have just navigated the team an extra hour out of the way back toward Pecos).  On the way, we encountered the worst flash flooding I have ever seen in my life a few miles south of Coyanosa, TX. We saw (at least) three vehicles swept off of the road into the rapidly rising water! Hail drifts created dense hail fog as waters continued to rise and roads completely covered with at 4-8 inches of water. We found a high/dry spot and waited the worst of the flooding out, but training thunderstorms were creeping from the southwest and I was worried that things we about to get a lot worse.  We got in a train behind some larger vehicles who went first and created a nice wake for us that we were able to comfortably get through.  I am very happy we were able to get out when we did, because we found out later from the NWS that this area now has over 4 ft. of water covering the road!

I never felt we were in a dangerous position until I saw the increase in thunderstorm activity to the southwest of our location.  It was clear that things were about to get ugly fast. A great reminder to always be aware of flash flooding. It is an often overlooked hazard of severe convective storms

MISC: Overnighted at the brand new Courtyard in Lubbock, TX for the second night in a row.

Posted by Dr. Victor Gensini at 8:41 AM No comments:

Saturday was a rather exciting day for the newbies on Trip 2. Not only did they get to see their first tornado, it just happened to be an EF2 wedge tornado that we watched for 30+ min. and tracked over 30 miles.


Photos of the event (some photos have been contrast enhanced): 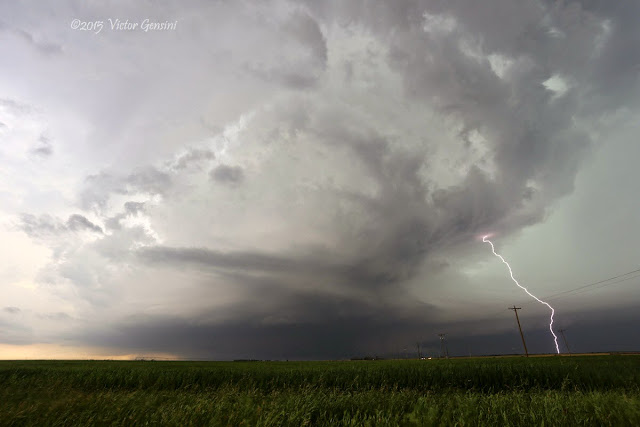 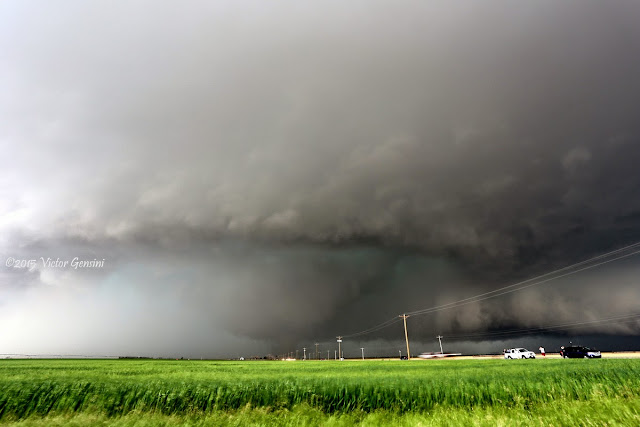 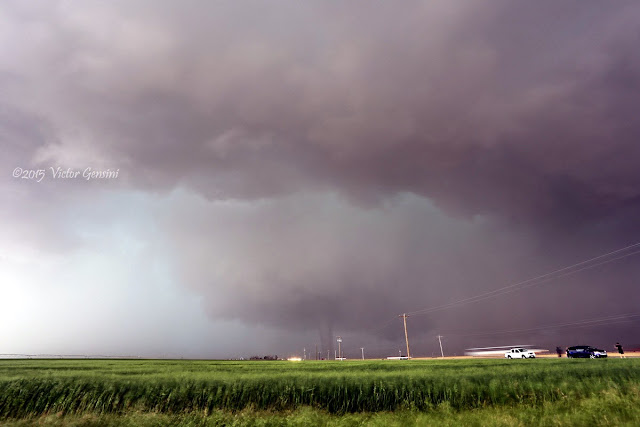 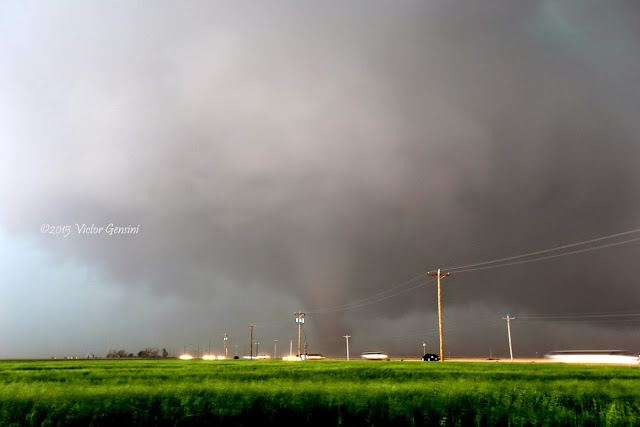 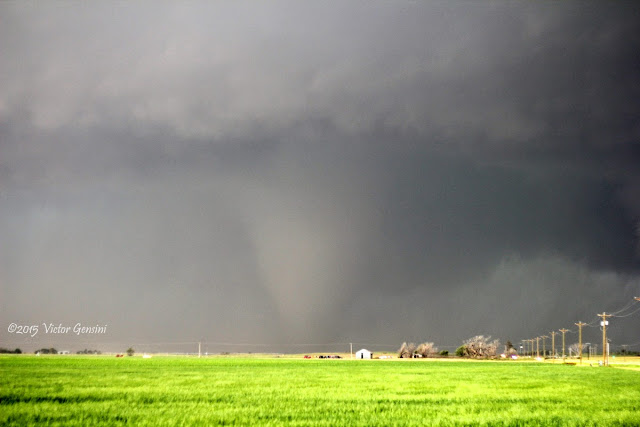 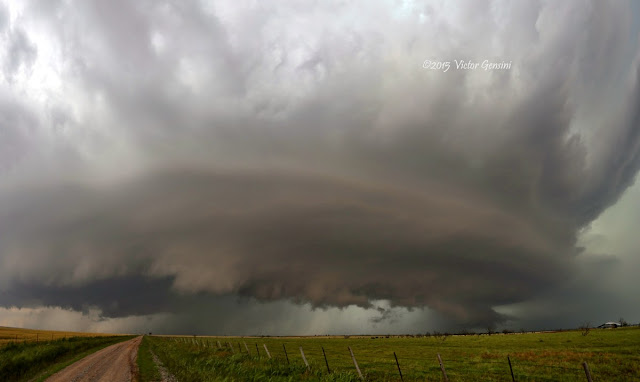 Posted by Dr. Victor Gensini at 8:33 AM No comments:

Day 1 of CoD Thunderstorm Lab trip 2 set sights on central/western NE for severe storm activity.  The prospects for tornadoes trended down throughout the day, but we were able to latch onto a pretty storm near Norton, KS.  Below is a tonemapped shot of that storm.  Tonemapping can occasionally make a photo *pop*, and I thought that this was an appropriate photo to apply the technique to (not all photos look good with tonemapping). 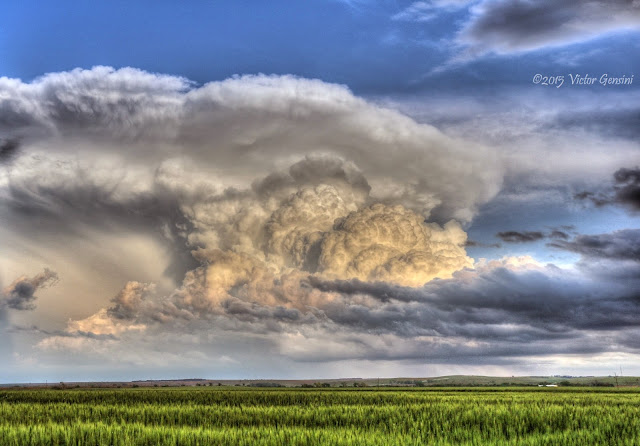 Dad and I left for the plains the previous evening in anticipation of Saturday's severe convective risk. It was clear that there would be severe weather somewhere, but a cold pool from overnight thunderstorms ended up greatly reducing the severe weather potential.  Despite the worked over surface air, severe weather still occurred corresponding to the rather impressive upper tropospheric dynamics in place.  Initially targeting southwest KS, the region was slow to clear and we quickly set our sites on strengthening convection in Colorado (storm motions we not in our favor!).  We stopped near Lakin/Tribune, KS, and met up w/ Walker Ashley (NIU meteorology professor), Stephen Strader (NIU Ph.D. student), and Alex Haberlie (NIU Ph.D. student).  It was Alex's first time to the Great Plains, so of course we gave him a hard time about what he had done to the day's setup.  Keeping the warm front in play, we continued northeast out of Tribune to a very turbulent sky. Whirling eddies, interesting cloud formations, and a warm frontal boundary made for interesting conversation in the car while traveling east toward our overnight destination of Salina, KS.  As luck would have it, a cell formed right on the warm front near Wakeeney, KS and immediately produced a tornado.  It wasn't too long before another (what appeared to be stronger) cell formed in southern Gove county Kansas lifting north toward Grinnell.  It was this cell that we targeted, and it really paid off despite some really frustrating initial views of this storm.  We were caught north in the forward flank of the storm and knew it was producing a tornado, we just could not see it.  Every second that passed caused frustration, as we knew we would be in a great place if the precipitation core would just pass north of I-70.  Eventually it did, and a nice elephant trunk tornado came into view. 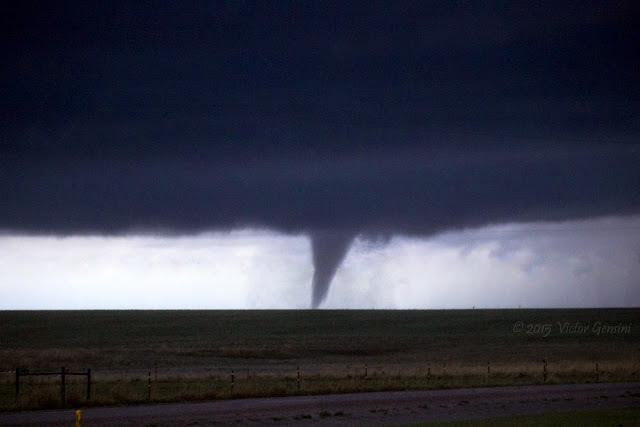 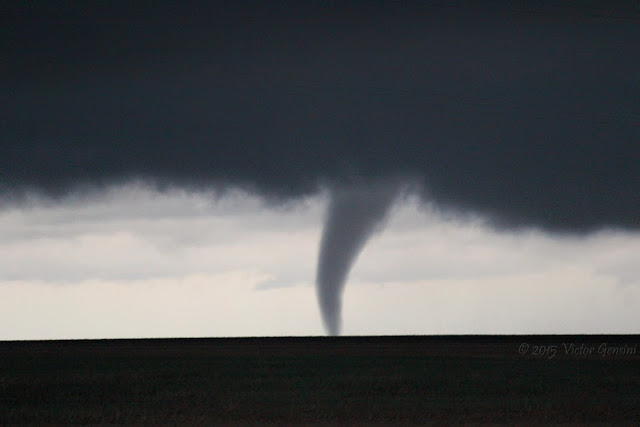 We saw at least 4 different tornadoes, with a few of them occurring after dark north of Grinnell (see one of these tornadoes in my poor quality video below).  It was great to get pops his first tornado, despite the dark and rainy conditions which made photographs extremely difficult.

Overall, it was a great quick trip to the Great Plains and Pop's first tornado experience.  I got to test out some new gear in anticipation of our upcoming Thunderstorm Lab field Trip (CoD Trip 2).

Track our trip on twitter (@gensiniwx ; @cod_stormchase)!
Posted by Dr. Victor Gensini at 7:22 PM No comments:

April Verification and May Forecast 2015

April averages 131 tornado reports (1950-2014).  This average is slightly higher (163) if considering only the period 1985-2014. This year, the U.S. tallied 181 preliminary tornado reports during April (calculated using the filtered preliminary tornado reports from the Storm Prediction Center), thus putting us at 138% or 111% of normal tornado reports this month, depending on the averaging period.  For ERTAF, I have been using <75%, 75<=x<=125%, and >125% of normal climatology (based on the 85-14 reports) to classify BA, A, and AA activity respectively.  This is obviously subjective and unimportant, as the atmosphere could really care less how we try to split these categories.  I am going to run with the lower, 111% of normal for April 2015, thus putting the month at average tornado reporting activity.  This aligns nicely with the April forecast for a 40/40 split between A and AA conditions.

Environmentally, one can see that the atmosphere was much more favorable for severe convective storms this April relative to the previous March post! 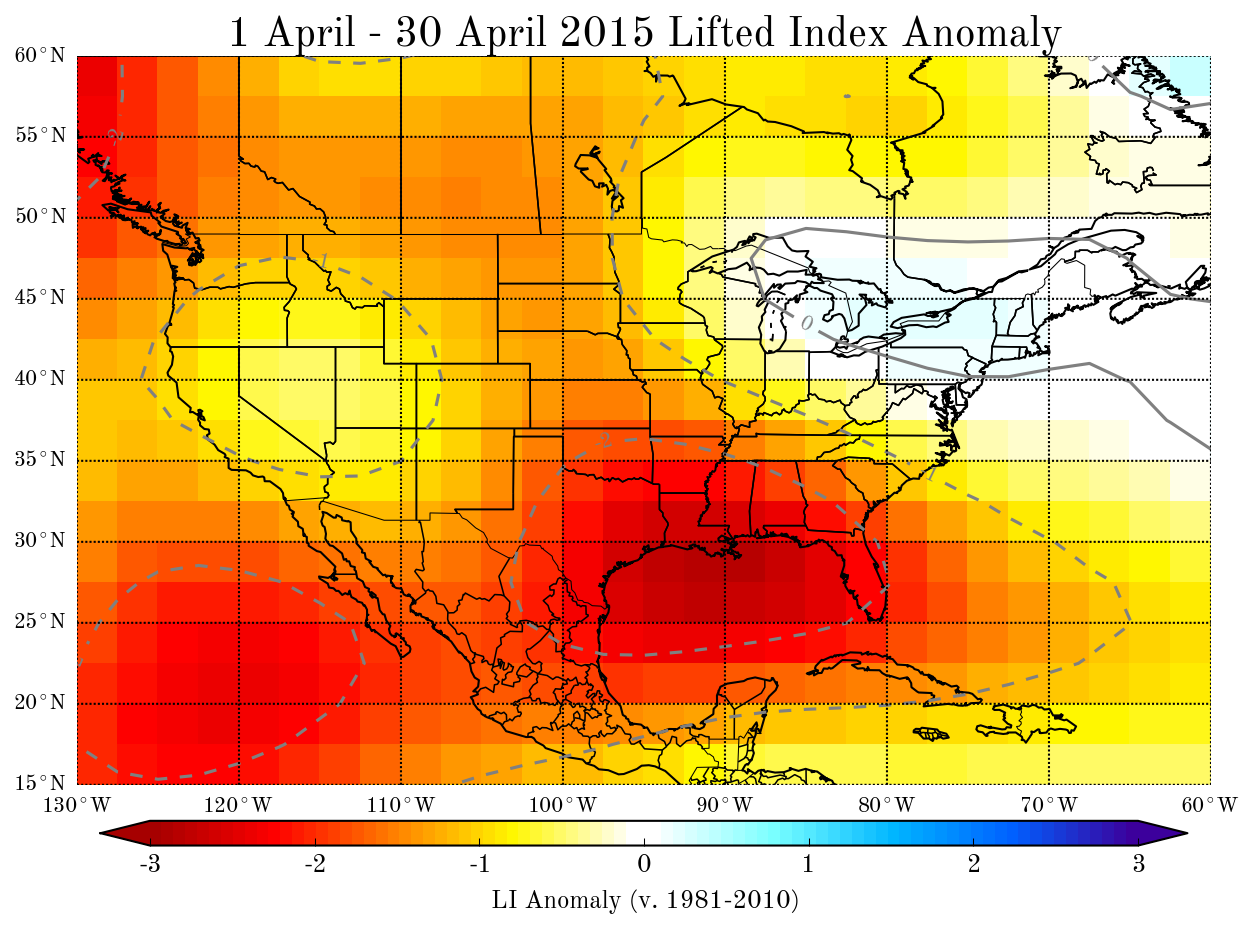 Red pixels indicate negative LI anomalies, which are indicative of an anomalously unstable atmosphere supportive of thunderstorms.  The greatest LI anomalies were found in the southern Great Plains and Gulf Coast areas, coincident with the greatest density of tornado and other severe weather reports.

Based on the current large scale pattern, dynamical models, analog approaches, and ongoing research, here is my forecast for May 2015:

Here is a map of reported tornadoes in the month of May: 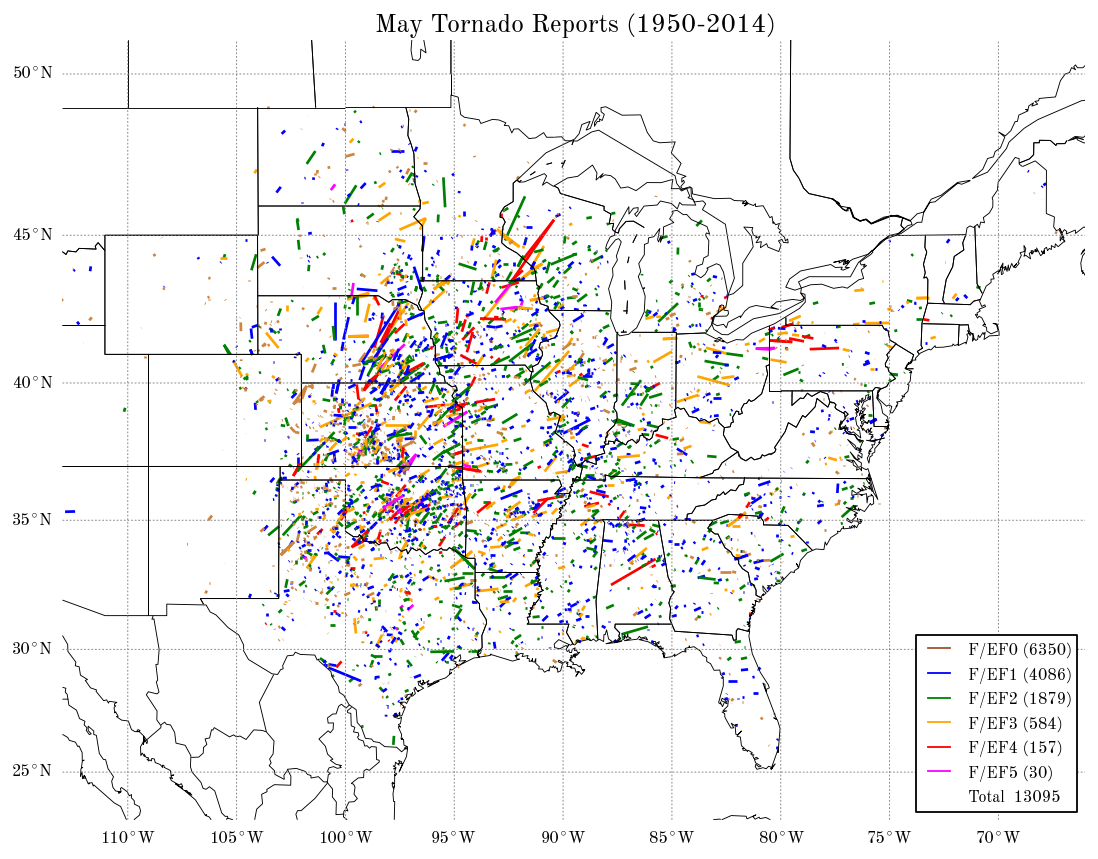