Geesh!  Another day, another great structure show.  After sitting most of the day waiting for convective initiation in Arthur, NE, a few towers began to form to our east.  We scrambled after a dominant tower south of Broken Bow, NE, and we were treated with a great westerly view of the little precipitation supercell.  After getting east of the storm (and enduring 1.25" hail), we were treated with a beautiful view that allowed for a few chances at time lapse.  We watched this storm for a couple hours before heading to Kearney, NE for the evening to get some sleep (the next couple of days appear to be very active!) 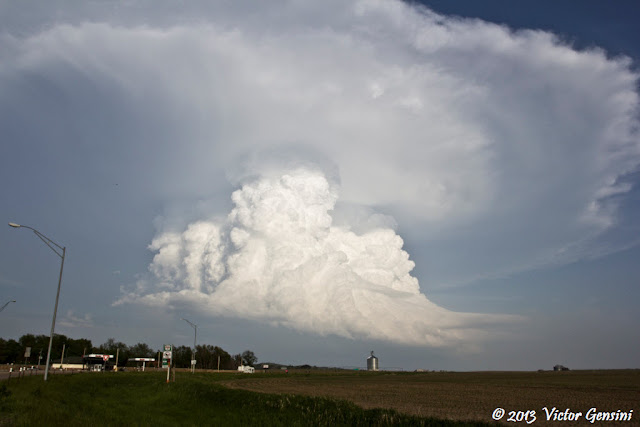 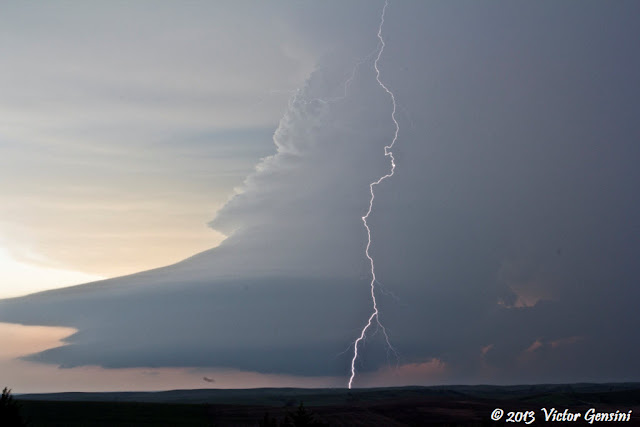 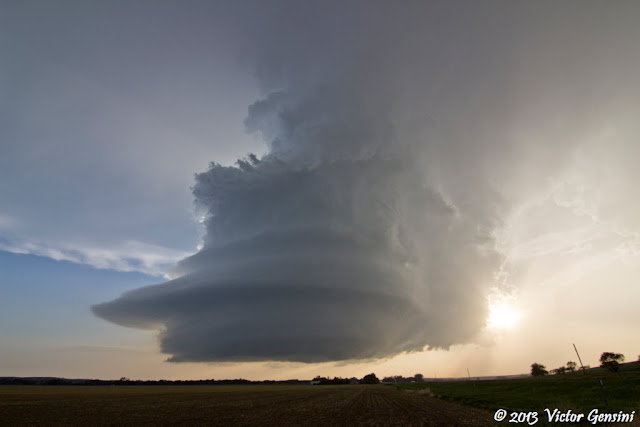 Time lapse can be found here.
Posted by Dr. Victor Gensini at 12:17 AM No comments:

Wow!  What a structure fest.  Saturday featured some fantastic supercell structure in a slow moving environment that allowed for easy chasing.  We sat most of the day in Chadron, NE, before blasting north to a storm that was persistent north of Rapid City, SD.  This storm was HP, Classic, and LP, during it's lifetime and treated us to many beautiful views northeast of Rapid City.  Enjoy the pictures (and especially the time lapse) from Saturday!  These types of chase days are the best... 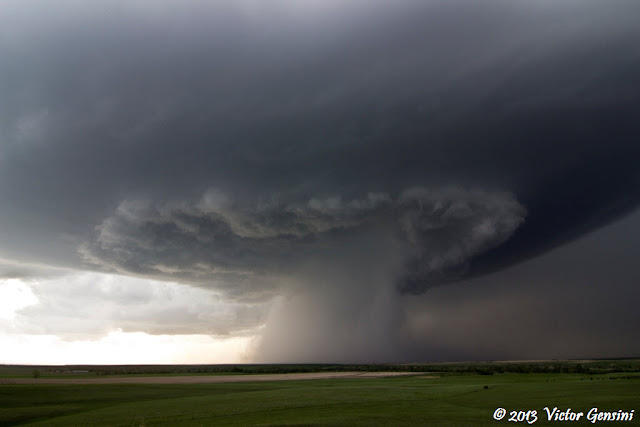 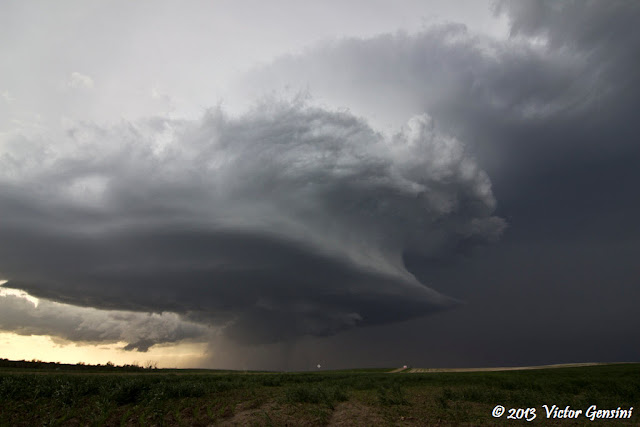 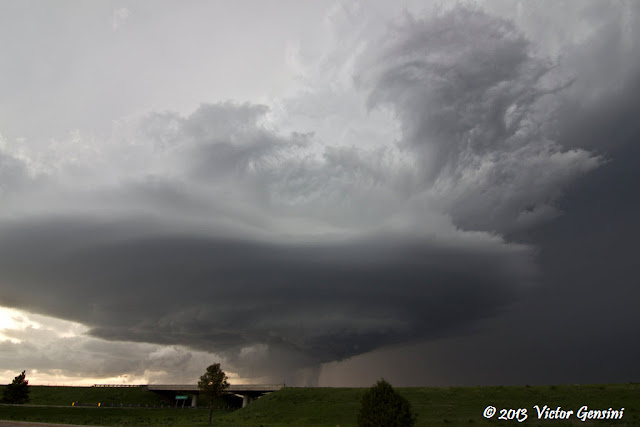 Timelapse can be found here.
Posted by Dr. Victor Gensini at 12:31 AM No comments:

A strengthening lee-side surface low was the play on Friday, with strong (20kt+) ESE winds into ne CO.  We watched towering cumulus from a park in Holyoke, CO, where I had the pleasure of meeting up the chase crew (Josh, Grady, et al.) from Western Kentucky University.  We watched the Holyoke cell most of the day and finally let it go near Grant, NE.  We also ran into CoD Trip 3!

I'm glad we let the storms shift to our east, as we were treated with some spectacular skies as sunlit mammatus and numerous cloud-to-cloud lightning strikes were plentiful.  A timelapse of our day can be found here. 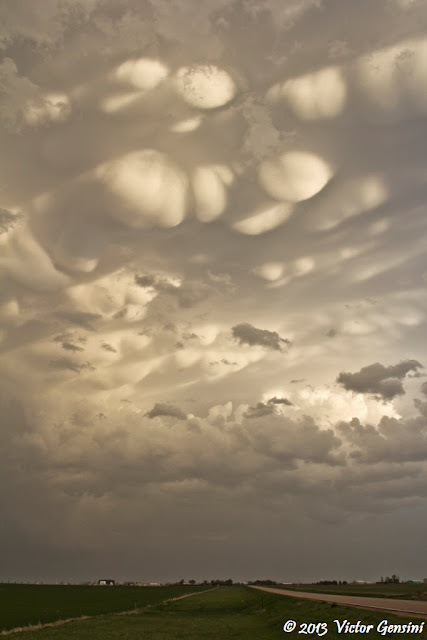 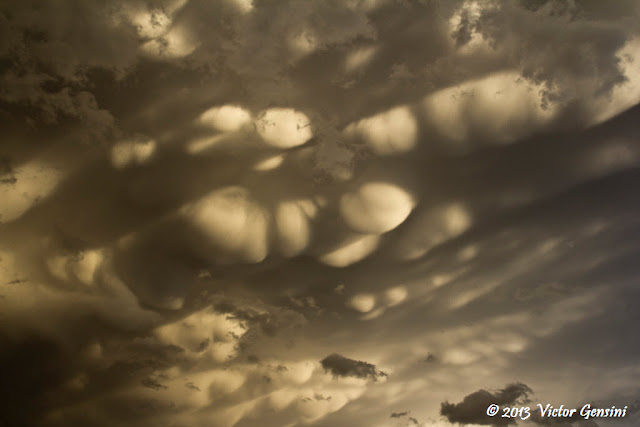 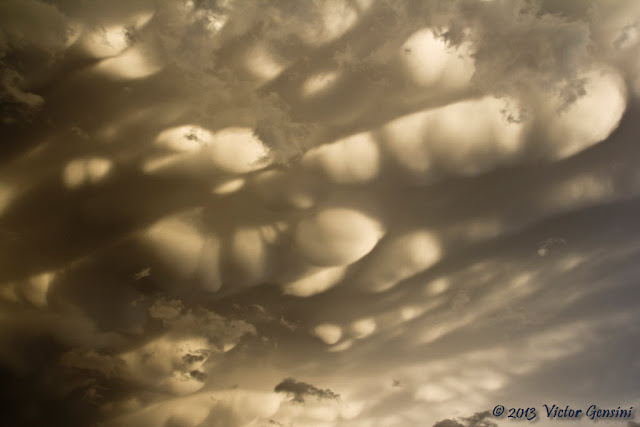 A moderate risk was in place for severe thunderstorms on the morning of 5-19 along a N-S oriented dryline in the Central Plains.  We had been eying Sunday's setup most of the week, and our plan was to play isolated storms along the dryline in central OK, as models had been hinting at robust thunderstorm development in that area for multiple runs.  Shear vector orientation (an important factor for storm morphology) was favorable in this area for isolated storms, and given the magnitude of the vertical wind shear (50+ kts.), isolated supercell thunderstorms appeared likely.

We awoke in Wichita and immediately noticed an outflow boundary oriented E-W in central OK from our "Coldwater Cold Pool" the previous evening.
We slowly drifted S along I-35 before stopping in South Haven, KS at a nice park for a softball game (1-0 good guys!).  After examining visible satellite for a couple hours and watching the 1800 UTC OUN sounding come in, we were excited that our morning forecast target may play out as planned.  Towering cumulus began forming near Oklahoma City, and we quickly loaded up to head south toward Edmond, OK.  The storm rapidly became a supercell before producing a tornado that hit Edmond (we watched a few power flashes as it moved through Edmond). 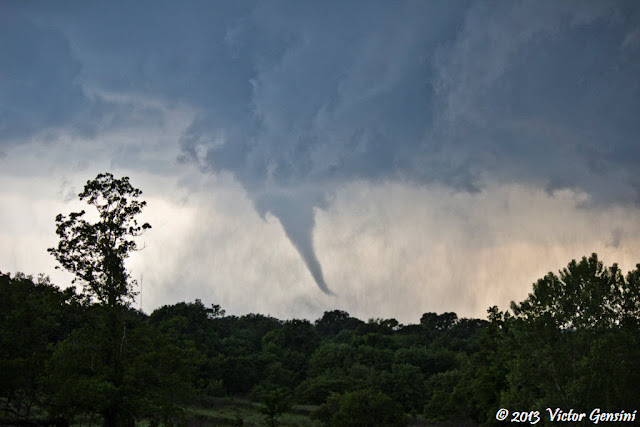 What happened next was rather bizarre.  While navigating east out of the bears cage, we stopped at a house with a very long gravel driveway to turn around and face the storm for a view.  When it became apparent that the tornado was quickly moving toward this location, we dropped about 1/4 mi. south of this house and watched as it was struck!  Thankfully, the damage did not appear to be too bad, and to my knowledge, the residents were unscathed.

After the rope out stage of the Edmond tornado, a new (much stronger) mesocyclone formed to the northeast of Edmond.  This storm had a much "meaner" appearance, and it was pretty evident that it was going to produce a large tornado...and it did.  The motions in this tornado were *violent*, in fact, more-so than in the video that I have seen of the Moore, OK tornadoes on May 20th.  This tornado had at least one large horizontal roll vortex, and appeared at one point to be two large tornadoes rotating around each other. 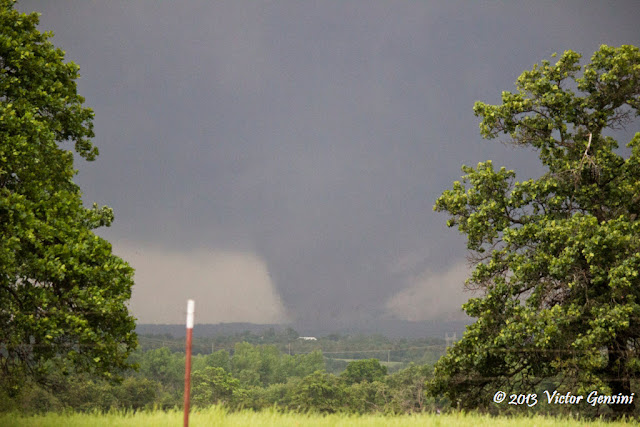 We stuck with this storm a little to long before dropping south to the storm that produced the Shawnee, OK tornado.  By the time we got there, that storm had become outflow dominant, but still treated us to many beautiful crepuscular rays at sunset. We ended the evening in Tulsa, OK, celebrating our great chase day and Morgan's (trip participant) 21st birthday.
Posted by Dr. Victor Gensini at 10:43 PM No comments:

5-18 featured a dual dryline structure across portions of S central KS.  After sitting in Greensburg, KS for nearly an hour, we got suckered south to an area of clumpy towering cumulus that were forming in steeper lapse-rate air coming out of the TX/OK panhandle area.  Once this convection crossed the boundary into substantially greater surface theta-e values, we were interested to see what would happen.  Turned out that a large cold pool was already established before moving into this area and all we were able to view was an outflow dominant cluster of sub-severe storms.  We made a decision to head south for the better environment, yet a storm formed north of Greensburg that produced a nice tornado.  Storm morphology really killed us this day. 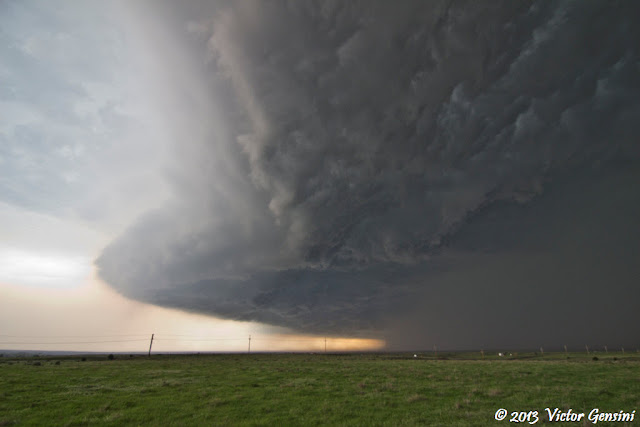 Posted by Dr. Victor Gensini at 8:59 PM No comments:

I need to catch up on sleep and process some pictures from 5-19 (it has been a long ten days on the road with Trip 2), but I wanted to clear the air of some erroneous claims and facts that I have been hearing about yesterday's (5-20-2013) tornadoes in OK.  I've heard everything from "no warnings were issued" to "lead time was 45 min."

First, let me preface by saying I was not chasing on this particular day.  Sunday was the last day of our trip and we *had* to come home Monday afternoon.  However, the drive back to Chicago allowed me to watch the events in Moore, OK unfold with a keen eye.  Luckily, I archived a lot of data and am just now starting to sift through some of it.

The media reporting of the warning aspect of this storm is particularly troubling to me (in addition to many other rediculous claims certain local Oklahoma City stations were blurting out).  That discussion is for another post.

Let's take a further look into the timeline of the Moore, OK tornado warning:


At 20:01 UTC, WFO OUN issues a tornado emergency for the town of Moore.

At 20:16 UTC, the tornadic circulation was just southwest of Moore (probably just entering town around this time).


Via radar, it appears the tornadic radar signature was in Moore around 20:20 UTC.

So, taking this approach (which I will agree is not the "T"ruth), this puts the tornado lead time for the folks in Moore at roughly 40 minutes! Not this bull#$%* I am hearing about 10-15 min! Even the tornado emergency had nearly a 20 minute lead time for Moore.  This was a great tornado warning by the same great forecaster who issued a tornado warning back on 3 May 1999 for an eerily similar situation.

Obviously, not all locations in the warning receive the same lead time.  It is a function of how far you are away from the tornado when the initial warning is issued.  This can make the lead time for a particular warning tricky.  If you score this on a city-by-city basis, then Moore has an amazing 40 minute lead time for this event. Hats of to the Norman, OK National Weather Service Office for a job well done!

It disgusts me how inaccurate journalists are becoming (see recent Boston Marathon bombing timeline).  Everyone races to the answer without doing the important detective work.  Ratings baby!

While I have your attention...consider donating to the central Oklahoma chapter of the Red Cross.  I had a pit in my stomach most of the day yesterday after hearing about the situation with the elementary school children.  The photos speak for themselves.

This is why I'm a severe storms scientist.

COD's Trip 2 watched a nearly stationary storm for an hour in northwest NE on Friday afternoon.  This area is always a tough place to chase storms, because of the hilly terrain of the Nebraska Sandhills.  However, the area we stopped to watch this storm provided a unique opportunity to time lapse passing trains and convection spreading eastward toward our location.  At one point (during the end of the timelapse), this storm began to develop supercell characteristics, but then was quickly undercut by its own outflow due to a lack of vertical speed shear. Enjoy the timelapse!

Tomorrow should be a pretty interesting day across southern KS as the eastern fringe of the jetstream begins to overspread the central Plains.  Our current target is Pratt, KS for some significant storms around sunset.  Check back soon for updates.

Posted by Dr. Victor Gensini at 1:26 AM No comments:

We intercepted a severe thunderstorm warned storm in northwest KS on Thursday afternoon.  We didn't stay to watch long, as we headed north to set-up for Friday's chasing opportunities in South Dakota. Make sure to watch the YouTube video in High Definition!


http://www.youtube.com/watch?v=IsQf6pRNv0g
Posted by Dr. Victor Gensini at 1:36 AM No comments:

Wednesday featured a unique setup in northwesterly flow behind a closed upper-level low pressure system migrating eastward over Oklahoma.  In short, we documented three tornadoes.  I hope to have better video after the season concludes and I can process it.  Until then, enjoy videos from our group:

Posted by Dr. Victor Gensini at 1:01 AM No comments:

Tuesday provided the first chaseable weather for College of Dupage's Storm Chasing Trip 2.  We awoke to some map analysis in Abilene, TX and decided it would be best to slowly drift southwestward toward Ozona, TX. We intercepted a sub-severe storm north of Rankin, TX, producing penny size hail and heavy rainfall.  We stayed ahead of the storms as they grew upscale and were treated with nice shelf features.  We were whitnessed a lengthy gustnado near Rankin (I'm trying to find students with decent pictures). 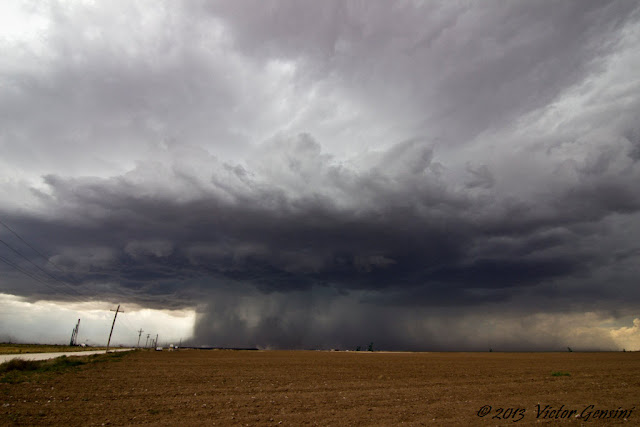 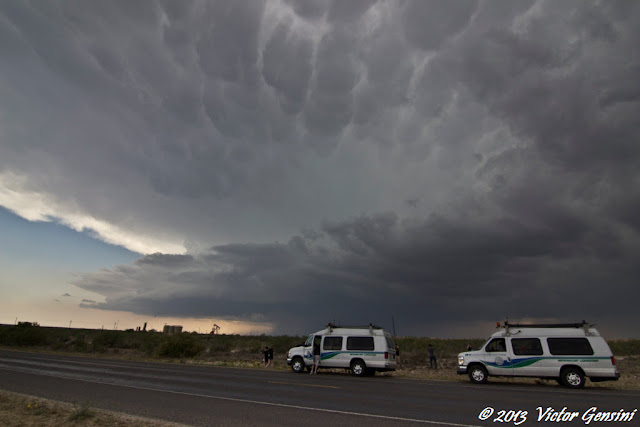 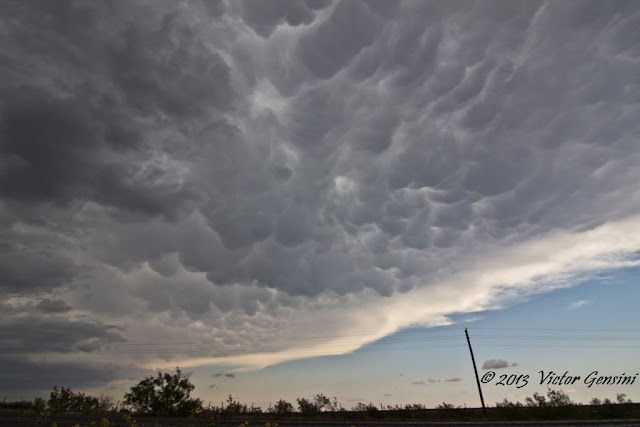 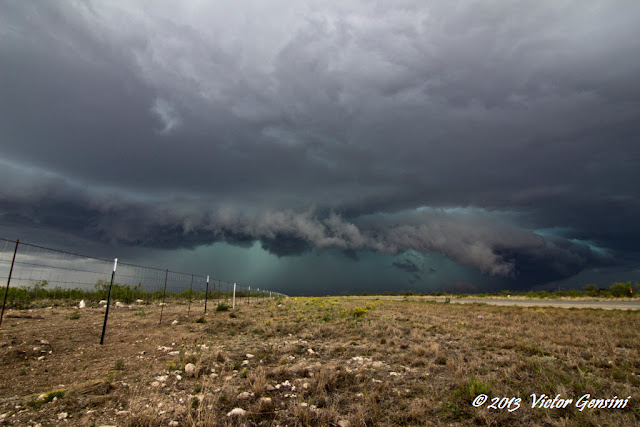