Friday contained feelings of disappointment and amazement.  Highlights included a few brief dusty tornadoes just northeast of LaCrosse, KS, including a large dusty haboob-like rear flank occlusion.  The local environment was primed for tornadic supercells, characterized by a northward lifting warm front with backed easterly flow, adequate deep-layer wind shear, plenty 'o moisture, and steep lapse rates contributing to modest instability.  The small limiting factor were the dewpoint depressions, contributing to less than ideal LCLs/LFCs.  Thus, parcels were not "convecting" in the lowest portion of the atmosphere and taking advantage of the excellent low-level directional shear.  As the boundary layer began to cool around sunset, supercells near LaCrosse and Hays began became more tornadic with a 46 minute tornado occurring near LaCrosse.  Unfortunately for us, we stuck with the first storm and just could not understand why it could not get its act together despite the favorable ingredients in place.  We followed this storm east of Hays and new convection began to fire further to the southwest on the now stalled warm front.  We gave it a look initially on radar but figured it was best to just stay put and try to take lightning photos as the sun began to set.  Stupidly, I sat out of the car for about 30 minutes enjoying the sky and taking photos and was not watching radar. Hence, I failed to navigate us to the LaCrosse storm as it began to produce a tornadofest.  I was angry with myself at first, but I realized that it is impossible to see every tornado even if one makes a good forecast (our morning target was LaCrosse and we sat there all afternoon; shoot!).  While I had a bad taste in my mouth most of the night, Craig and Tony were absolutely fascinated with the initial supercell to the northeast of LaCrosse.  Honestly, it was great to see them so excited.  Sometimes experience can immune one to the real joy and excitement that is being on the Great Plains observing convection.  The UGA guys reluctantly head back tomorrow, but it has been great having them as company.  As for me, I will give it one more shot in KS/NE tomorrow before heading home for Memorial Day. 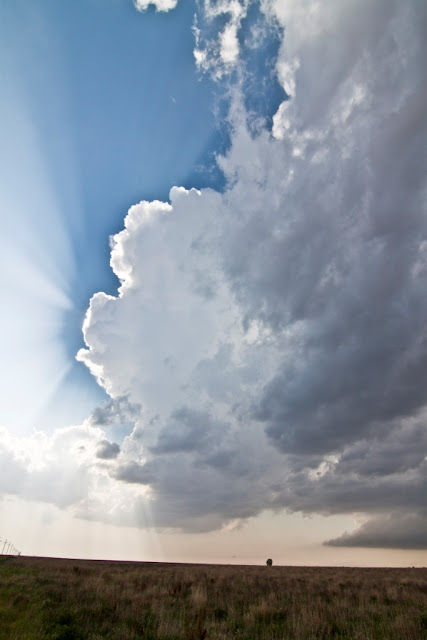 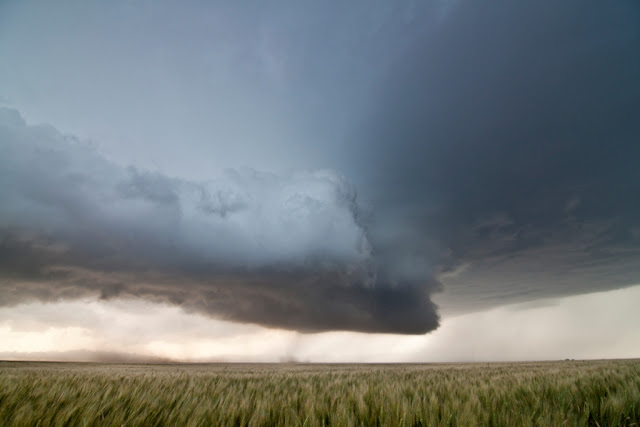 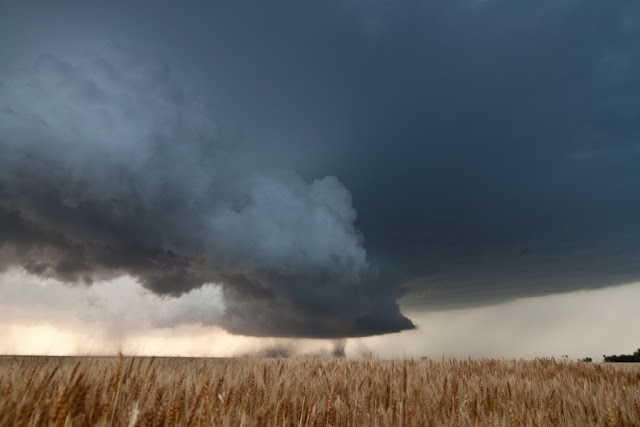 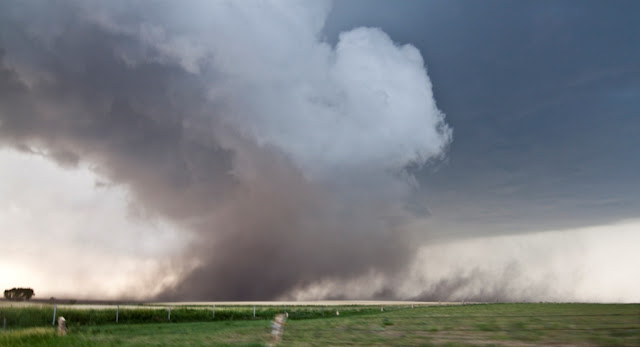 Dust associated with an occluding RFD 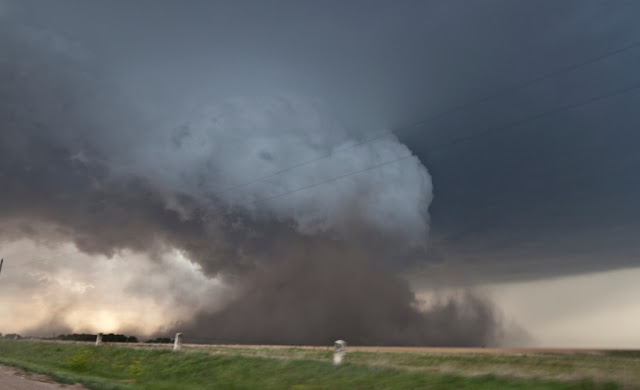 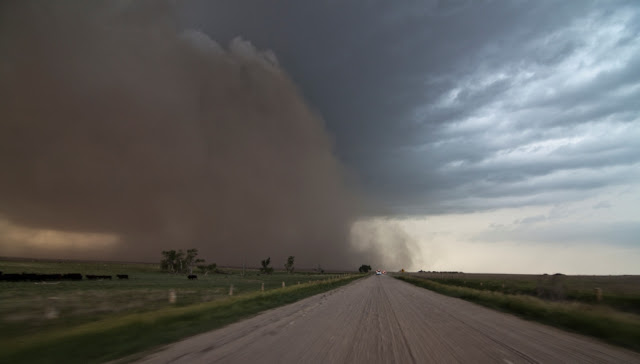 Time to coin the term Haboobnado? 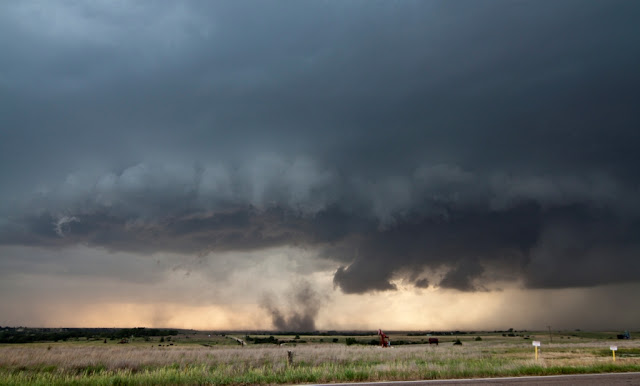 Starting to look more shelfy now...Was hard to tell if this was a gustnado or associated with pendant just to the north 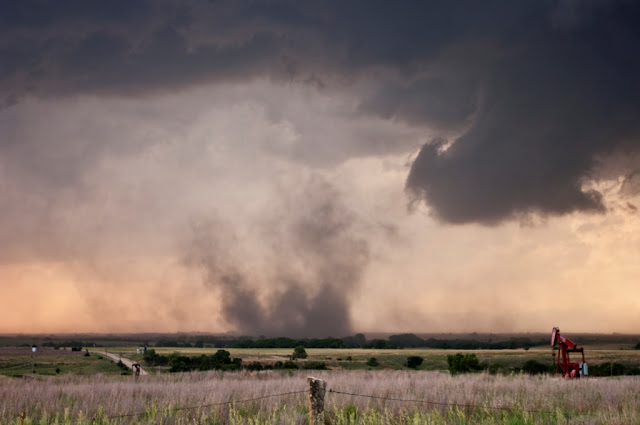 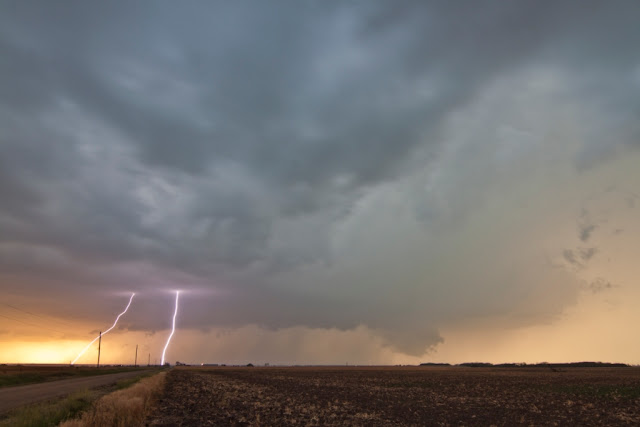 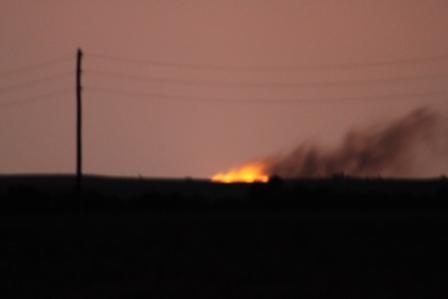 Lightning from this storm actually sparked a wildfire!

Explosive afternoon development across KS via visible satellite
Posted by Victor at 9:10 PM