Wednesday featured a MDT risk for severe storms across eastern portions of NE and western portions of IA.  While good surface moisture and instability were in place, the lack of a large scale focus for convection led to limited coverage of convection across the risk area along and ahead of a mesoscale boundary in eastern NE.  After driving most of the morning and eying visible satellite we (pops and I) latched on to a supercell near Fullerton, NE.  This storm was initially just a high-based hailer (forming back in the steeper lapse rates).  However, after a split, the right-moving portion of the storm started to look much better and was now featuring a persistent wall cloud and broad rotation.  It was pretty clear to me that this storm was *not* going to produce a tornado, as no clear slot was evident (although, the local yokel who pulled up next to us was sure it was going to...).   We stayed ahead of this supercell all the way to Columbus, NE enjoying occasional lowerings and remarkable lightning (none of which would cooperate with my photography!) before calling it a chase.  We ended up in a cheap room in the downtown OMA Doubletree via my priceline skills :-) 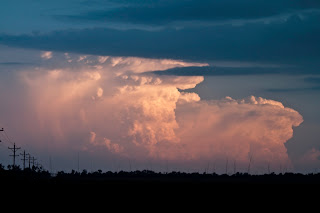 Nice lookin' convection to our S near Hastings, NE 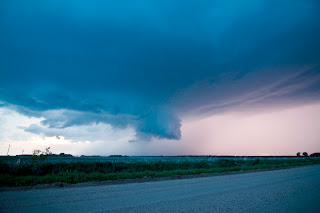 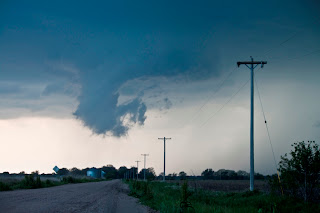 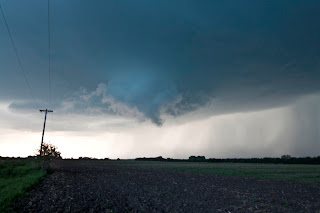 Broad rotation SW of Fullerton, NE. Video here.
Posted by Victor at 9:19 AM