Another Failure of the Warning Process

During Labor Day 2011, remants of Tropical Depression Lee spawned a preliminary count of 13 tornadoes across FL, GA, NC, SC, and VA. This is not uncommon of land-falling tropical systems, but this setup in particular was favorable for rotating updrafts in northeast quadrant of the cyclone. As the afternoon progressed, a small cell formed near Newton county and began racing northeast towards the University of Georgia (Athens, GA). What happened next was yet another example of multiple aspect failure in the warning and information dissemination integrated process (note: there are many storm warning and response examples that are both good and bad. Many of these will never be reported on in the news, unless they happen to be a media-defined tragedy. Thus, this is simply a documentation of one of the many failures I have seen in recent years).

The cell in question prompted a tornado warning at 4:43 P.M. EDT from WFO FFC:

THE NATIONAL WEATHER SERVICE IN PEACHTREE CITY HAS ISSUED A

* OTHER LOCATIONS IN THE WARNING INCLUDE BUT ARE NOT LIMITED TO
BOGART...WHITEHALL...ARNOLDSVILLE...CRAWFORD AND WINTERVILLE.

WHEN A TORNADO WARNING IS ISSUED BASED ON DOPPLER RADAR...IT MEANS
THAT STRONG ROTATION HAS BEEN DETECTED IN THE STORM. A TORNADO MAY
ALREADY BE ON THE GROUND...OR IS EXPECTED TO DEVELOP SHORTLY. IF YOU
ARE IN THE PATH OF THIS DANGEROUS STORM...MOVE INDOORS AND TO A
BASEMENT OR INTERIOR ROOM ON THE GROUND FLOOR. STAY AWAY FROM
WINDOWS. IF DRIVING...DO NOT SEEK SHELTER UNDER A HIGHWAY OVERPASS.

THIS IS AN EXTREMELY DANGEROUS AND LIFE THREATENING SITUATION. THIS
STORM IS CAPABLE OF PRODUCING STRONG TO VIOLENT TORNADOES. IF YOU ARE
IN THE PATH OF THIS TORNADO...TAKE COVER IMMEDIATELY!

Here is an animated .gif of the lowest-tilt BREF (left) and SRV (right) just before and during the issuance of the warning from FFC (click to enlarge).

What's sad is that so-called "storm based" warnings have been in effect since 2007! There is clearly no immediate threat to western Oconee county, yet the polygon would certainly indicate otherwise to the untrained eye. Additionally, the warning text mentions "strong to violent" tornadoes possible with these storms! Really? Violent tornadoes without a sustained supercellular mesocyclone?

While this particular failure lies in the hands of the warning forecaster, how about an investigation into the dissemination of this information from the NWS to a typical user (in this case, we will examine a typical student at UGA). Remember that for the integrated warning process to be successful, all facets must execute their responsibilites promptly and correctly. Most students are signed up to receive SMS text message alerts and phone calls from UGA in the event of an emergency. In this particular example the UGA campus was not in the tornado warning polygon issued by FFC, nor was there an immediate threat of a tornado. However, somewhere deep in the crappy policy drafted by UGA, it *probably* states that sirens will be sounded and campus put on alert when Athens-Clarke county is put under a tornado warning. Regardless, the emergency plan was activated, and I received a text message alert to my phone at 4:49 P.M. EDT: 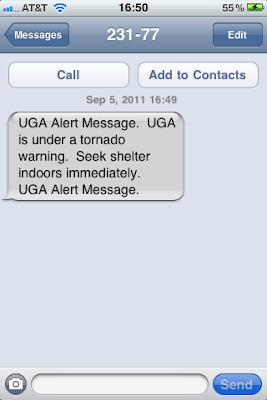 Recall that the warning was issued from the NWS at 4:43 P.M. EDT. So, 6 min. passed before I received the alert from UGA. While I have no way of knowing if this time fluctuates from event-to-event (this is my first emergency alert), I can say that 6 min. is unacceptably slow for a tornado warning. In fact, in at least half the cases, this 6 min. would expire the lead time of warning issuance by the local WFO effectively giving the user "no warning." As if that was not enough, the UGA emergency call alert happened 5 min. post-text at 4:54 P.M. EDT: 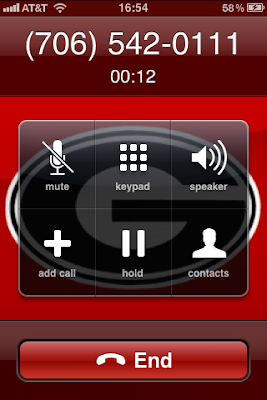 By now, 11 min. have passed since the warning issuance from FFC. Yes, there may be challenges to getting information to that many students in a timely manner, but it would fail miserably in the case of a real tornado emergency. I mention all of this to say that we *have* to become smarter on all integrated warning fronts. We have the technology to do this! GPS location + GIS mapping software can easily determine if you are in the defined threat area. In fact, our technology of software development (e.g., radar displays) have far outpaced our technology in the branch of warning dissemination (the two are nearly night and day IMO). Of course, none of the information dissemination really matters if we keep seeing foolish cover-your-@$$ type warnings from local WFOs...
Posted by Victor at 3:51 PM No comments: