Paul Sirvatka and I were excited in the morning with our target area being just E of DSM. I'll offer a few thoughts as to why I think the supercell potential was limited through the afternoon in this area (feel free to debate this with me, as I may be incorrect). Without going back and doing a substantial reanalysis, it appeared to me that the gravity wave that induced an MCS in east/central WI created a meso-high in its wake, causing pressures to rise creating a small surface ridge in eastern IA. This location was then characterized by largely unidirectional hodographs with little 'focus' for convergence and plenty of large-scale ascent ahead of the approaching shortwave. Thus, especially after the very beginning of the event, many storms were multicellular in nature. I'm sure there was more going on, but those are just some of my initial thoughts. The environment of the Joplin, MO tornado was comparable to the environment eastern IA (via 00z 23 May upper air observations), but IA and IL were lucky this time. 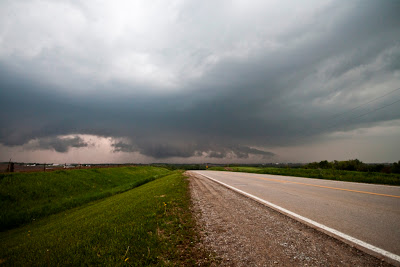