What a busy day of natural disasters! While the tsunami triggered by a record-breaking earthquake early this morning has caused grim pictures and videos from coastal areas of Japan and Hawaii, closer to home, an outbreak of wildfires across east-central Oklahoma has forced many residents to evacuate their homes. Below I have included a visible satellite animation of the central great plains from late this afternoon. I like to tell my students that a visible satellite image is like a digital camera on steroids in geostationary orbit above the Earth's surface. Therefore, if a fire is large enough, one can typically see the smoke plumes caused by the fires.

The first frame of the .gif animation has surface winds overlaid to illustrate the resulting direction of the smoke plumes. 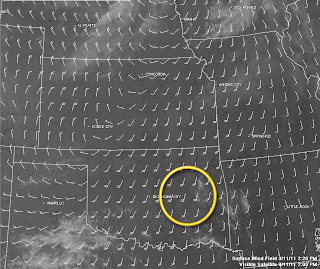 You should have seen the 88D KOUN imagery. Many more fires showed up there that weren't seen on the vis sat. It was somewhat of a challenge to work while trying not to be totally distracted by this and the Japan quake/tsunami aftermath today!

Heh, try KTLX, even though I have access to both KTLX and KOUN! :-)