Wednesday featured an interesting set-up for severe storms in west central OK as a cold front was rapidly plunging southeast into a very unstable airmass (see 18z OUN sounding below). We were certain the cap would break at some point and that severe storms would break out along the front, however, the tornado threat appeared low given the very crappy speed shear. Sure enough, storms initiated in close proximity to our target of Canton, OK and quickly became severe thunderstorm warned for large hail (some members of the V2 project ended up with shattered windshields). We stuck with the "tail end charlie" isolated storm and watched with frustration as it would never really get its act together. You could tell these blobs didn't have a chance to produce tornadoes as inflow into these storms was probably less than 10 mph. Argh! Anyway, we played with an interesting lowering shown below until the sun started to set where we then headed to Binger, OK to sample the hail core under a shell gas station awning. Nickels to quarters was the verdict...As expected, the tornado threat started to increase as better low level shear was introduced via the low-level jet. Too bad this is a nocturnal phenomena! I am convinced that if shear was a little better, this would of been an outstanding day... 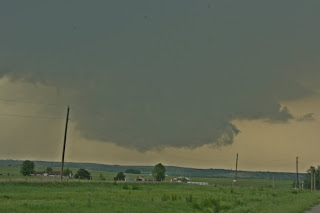 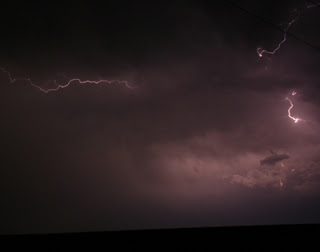 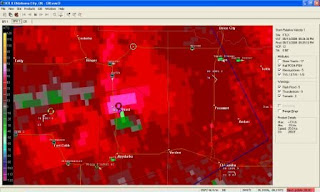 Rain wrapped TVS just south of our location. Whew!
Posted by Victor at 10:55 AM