A few people have been asking, and I haven't blogged in a while, so I thought I would talk about the wildfires in Southern California that have devastated over an estimated 10,000 acres through early Sunday morning. Fires continue to blaze early Sunday with some incredible pictures coming in to CNN via their I-report feature. Earlier this week, the Storm Prediction Center had a critical outlook for fire weather in Southern California due to a reversal of flow down-sloping off the Santa Ana's towards Los Angeles. These Santa Ana winds occur when east-to-west flow develops over the Santa Ana mountains, descends, and becomes very warm and dry.

These winds, similar to the Chinook winds that are frequent this time of year, can easily reach 50 mph! This obviously helps to spread a wildfire and makes a firefighters job virtually impossible. A diagram I pulled off the internet helps explain this process visually: 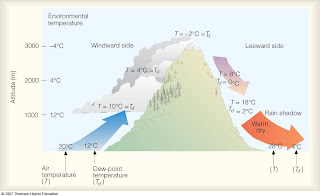 The windward side of mountian ranges feature many different types of trees and vegetation that are supported by the plethora of precipitation that the windward mountain side receives. If you now reverse the flow of the air in the diagram above, the warm and dry air is decending over forests and in this case towards million dollar pads in eastern Orange county. 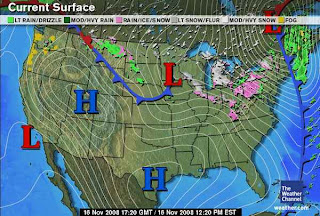 Visible satellite image of the wildfires in SoCal (click to enlarge)
Posted by Victor at 11:46 AM