I captured this image this morning after looking at visible satellite over the Gulf of Mexico and pondering over the idea of negative helicity. Most of the Storm Relative Helicity that meteorologists think of is in the sense of a WAA regime in which the winds turn clockwise as you increase in altitude through the atmosphere. In this case one can see the winds at the surface are out of the NE, while just a few thousand feet higher in the air, they turn to the SW. This is a textbook CAA scenario for much for the Gulf Coast. The cooler temps are also reflected in the 11 AM surface observations...So not many MET's think about helicity in the negative sense, but if you had upward vertical motion in that sort of a field, it would provide the parcel with the ability to rotate clockwise, instead of your normal counter-clockwise rotating supercell. Because this type of wind profile is associated with CAA, we can usually eliminate any possibility of storms being able to tap into "negative helicity." 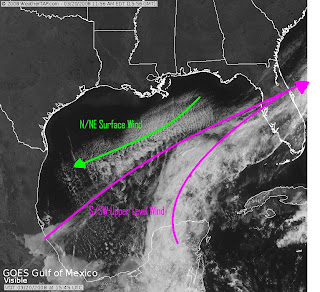 Nearly a 180 Degree Turning of the Winds w/ Height

CAA for much of the Gulf Coast

New Orleans, LA, Hodograph Shows the "Negative Helicity"
Posted by Victor at 11:09 AM No comments: