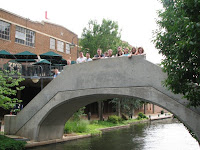 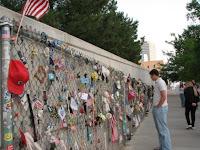 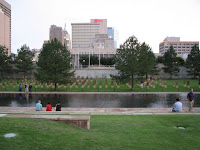 Reflection pond & seats for the victims
Last night we ventured to the OKC bombing memorial and Bricktown. We enjoyed dinner at a very nice Italian restaurant and then visited the memorial where the federal building once stood...Very cool!
Posted by Victor at 4:38 PM No comments: 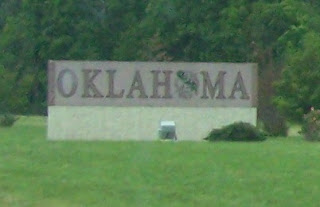 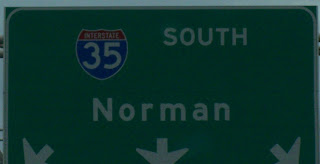 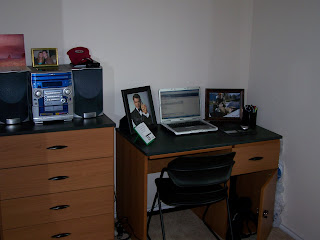 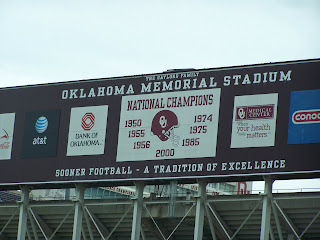 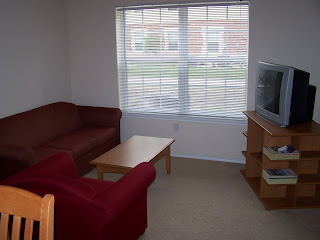 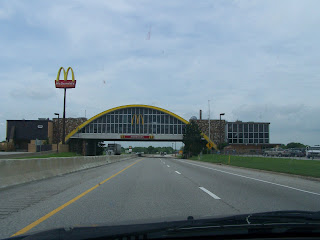 After a long drive, I have finally arrived in Norman. I have been here for 1 hour and I already love it! The town is very nice and seems like a great college town. I snapped a few pictures while driving, but there will be many more to come! By the way, my address for this summer will be :
Sooner Hotel
Victor Gensini
300 Kellogg Drive
Norman, Oklahoma 73072

Posted by Victor at 4:07 PM No comments: 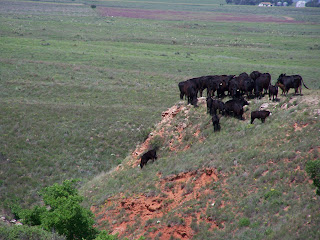 Cows trying to decide if they should die now or later... 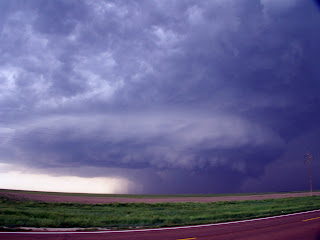 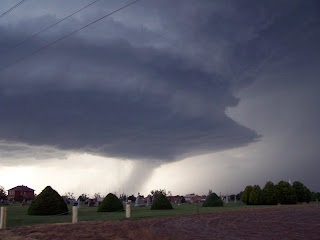 Same storm about 20 min prior

Wednesday's MD for the panhandle 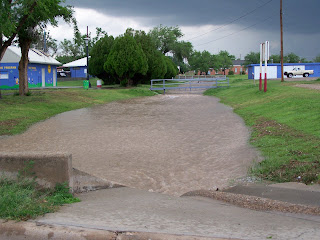 Flash Flooding in Stillet, TX
I took video during Tuesday's tornado so I will try to post links to clips soon. If you would like to see more pictures just let me know.
Posted by Victor at 11:43 AM 1 comment:

Currently riding in the car on the way to Oklahoma City where we are going to stay and make the journey back to DeKalb tomorrow morning…Today was well, in one word, frustrating. Everything looked to be in place for discrete supercells along the northward retreating boundary. We arrived in Perryton, TX after grabbing lunch at Bob’s place in Mead, KS. After wasting some time watching some little boy cleaning his lawnmower, we saw towering cumulus to our South and waited for the SPC to issue a tornado watch. Shortly thereafter, the PDS tornado watch was issued for our area. At that point, we were a little North of where we would have liked to be...We had to make a decision to head south and try to core punch the already HP feature-like storm, or head west and try to circle around the developing supercell. We decided the latter and headed around to Borger, TX to catch I-74 which would give us a north-south option for our storm. Today we had radar up and running after blowing a fuse yesterday; and after heading north on I-74 and watching the system for a while it was obvious that the system was becoming outflow dominant. We decided to head back to Borger (now our 4th time this trip) to try to catch a tor warned storm that was forming off to our southwest. The shitty road network of this area really hampered our ability catch up to these storms. They were not isolated supercells like we were hoping for, which is probably due to the fact that the cap was a little weaker today as convection was starting to fire around 12:30 to our northeast. I must say that after yesterday’s taste of severe weather had me wanting more, but overall I am happy with the trip. I visited 3 new states (OK-TX-KS) and saw my first tornado of 2007. It was a great trip and definitely worth the 900 mile drive to Liberal on Sunday.
Posted by Victor at 1:08 AM No comments:

Yesterday was what storm chasing is all about. The day started off in Shamrock, TX and after a few glances at data, it was apparent that we were going to have to head north towards West Central Kansas. Our target was Dodge City, KS, and we made it there in plenty of time to grab some food and check over data. The moisture axis was a little to the east of DDC, but better convergence do to the dryline was occurring just to the west of DDC. From Dodge City we headed North on Highway 23 and followed a towering cumulus field just off to our West. It was apparent that the cap was strong, and we were hoping for a storm to pop the cap and tap into the energy available. Sure enough, the storm we were following eventually turned into an HP supercell with great mid-level striations due to good upper level rotation. We stuck with this cell on the southern end of the boundary while it went through a few cycles of occluding and reforming. We realized that we were a little too far to the West of the storm, so we hopped on I-70 and traveled East towards Wa Keeney, KS. At Wa Keeney, we went north to keep up with the developing storm, and then the fun started. As we were getting great pictures just to the Southeast of the HP supercell, the mesocyclone wrapped up nicely with an obvious RFD clear spot punching in on the western side of the storm. Watching the rotation of the meso and the wall cloud was miraculous. A funnel cloud quickly spun up and we were treated to a brief tornado touchdown just west of highway 283 in Graham county KS. The funnel was visible for almost 10 min when the funnel roped out in a beautiful fashion. We then saw another HP type cell starting to form to our South and West and we realized we were going to have problems. We stayed to watch the mesocyclone occlude and then knew we had to head South on 283 to get out of the precipitation forming to our Southwest. Heading south, we were pounded with nickel to penny size hail that covered the road and reminded me of January! Our maneuver south paid off as we found out that the nickel to penny size hail we encountered turned into tennis ball size hail in Northern Graham County! We then decided to head east on I-70 to get ahead of the HP cells that were quickly evolving into intense linear convection and racing eastward. Booking east put us near Hays, KS where we were able to quickly book a room and head back out to catch some lightning pictures. While taking lightning shots, a tornado warning was issued for Ellis County which is where Hays is located… Heading back into town, people were going crazy thinking that Hays was going to be destroyed! We had a great view of the storm with the frequent lighting and we were sure that there was not a tornado with the storm. Needless to say, the storm barreled through Hays and produced prolific lightning, hail, and wind. It was definitely a great end to a great day. Today we are on our way to Borger, TX in hopes of an even better day than yesterday…Today moisture and shear both look better than yesterday so we will see what happens… :) I will be posting many pictures tonight...
Posted by Victor at 2:13 PM 1 comment: 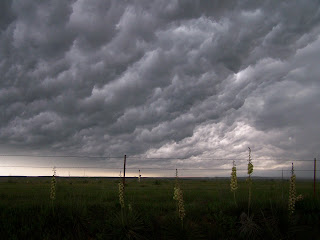 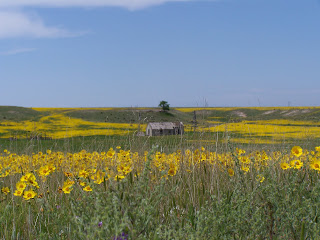 Great picture day and hopefully it will get better tomorrow. Currently in Shamrock, TX and hoping to head somwhere into West Central/North KS tomorrow to await storm intiation along the dryline. Had high hopes this morning for the panhandle of TX to produce, but the limiting factor today, which has been the case with alot of setups this year, was the lack of moisture. Tomorrow dewpoints are progged into the 60's across most of Central KS and even into NE! We will also have support from the upper level trough which will hopefully help to drive the dryline Eastward into our area. As of right now, tomorrow seems like the best chance for a supercell, if any storms can break through the cap, before the cold front plows through the great plains on Wed... 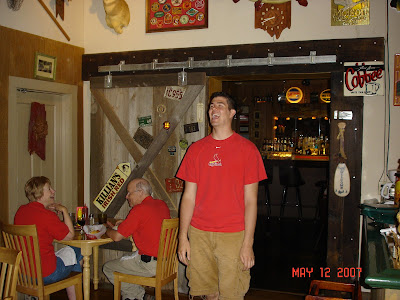 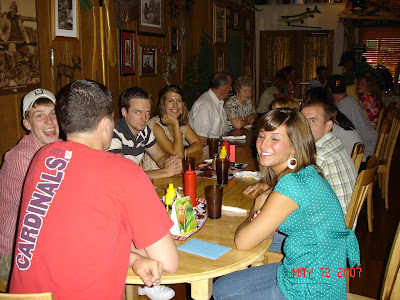 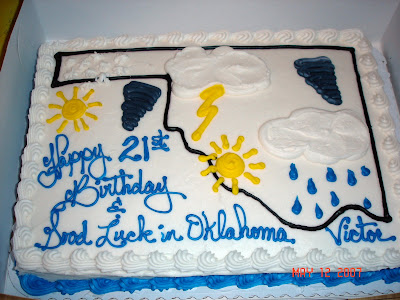 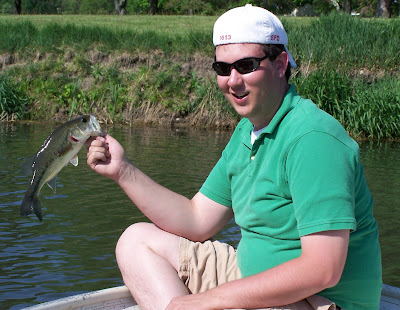 Cousin Matt with a Largemouth Bass

Wow, what a start to the summer...After working a few AM hours at the family grocery store, my cousin convinced me that we should try our luck at bass fishing...I thought that it would be an easy excuse to get away, grab a few brews, and catch up with him. Amazingly, his beer to fish ratio this time was respectable...After hurrying in, I cruised over to Ladd because my girlfriend and her parents wanted to take me out to eat one last time before going to Norman. Unexpectedly, I walked into the back room of Illinois Valley Bar & Grill and 21 people were there to yell SURPRISE!!! Needless to say I was shocked! The group consisted of a few friends from high school, my family & grandparents, my girlfriends family and friends, and the DeKalb crew ;) After enjoying some fine food and a couple Millers, we journeyed back to Jenna's house where we finished the night off with some brew and entertainment in the form of Josh playing JJ and DMB on the guitar...Overall a great night and one that I will remember forever! Thanks to everyone that came, especially the DeKalb crew who made quite a journey to get to the IV, and everyone who brought gifts which was totally unnecessary! On a side note, Coomer and I are going to try and catch some nice pictures of the linear convection that is advertised to push through the area tomorrow. 18Z models have backed the system up quite a bit which would bring it through our area around peak heating...This could lead to a nice wind threat and hopefully we will be able to catch a few good pictures!
Posted by Victor at 6:51 PM 1 comment:

Where is May going? 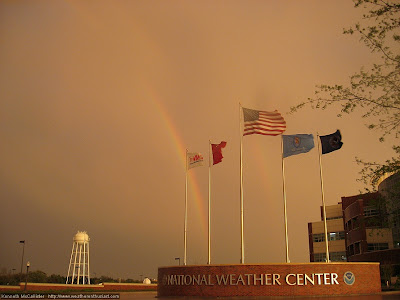 Unbelievable how fast the time is going...Currently 15 days until I journey to Norman to have the greatest summer of my life; at least I hope so...Finals are over and it is time for some serious R & R before the next journey begins. I am trying to see as many people as possible before I leave so get a hold of me if its been awhile and you want some lunch/beverages etc... In the meantime, hopefully we will have something to chase in the near future as I am itching to chase convection. Not even kidding, I would probably chase a cumulus cloud right now. It actually looks like more of a summer pattern at the moment, but maybe mother nature is just reloading and this season is just getting started? I'd like to think this anyway ;) As for this summer, I've decided that I'm going to be a photographer, so be ready for LOTS of pictures! I will try to post about 2 times a week depending on time issues/chases/projects etc. so maybe more maybe less... Adios everyone! OU here I come!
Posted by Victor at 12:14 AM 2 comments: